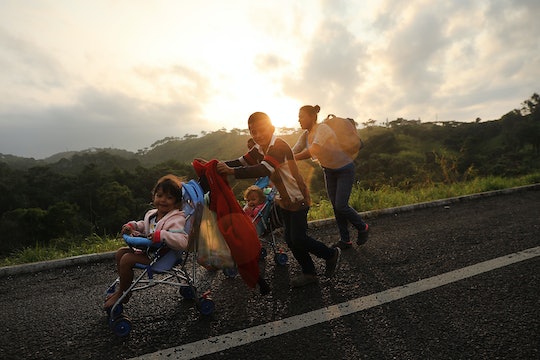 Debunking 6 Misconceptions About The Migrant Caravan

Over recent months, thousands of families from Central America have fled horrendous conditions in their home countries to seek asylum in the United States. Forming a walking caravan, they've traversed thousands of miles while dealing with scorching heat, exhaustion, dehydration and illness. And as their journey has continued, many myths about the caravan have been circulating. So what is the migrant caravan? Here are six misconceptions, debunked.

Not only are caravan members escaping violence back home, they also face threats from the U.S. government as they make their way to the states. On Sunday, Nov. 25, U.S. Border Patrol agents fired tear gas at hundreds of migrants who reached the San Ysidro Port of Entry at the Tijuana-San Diego border, according to CNN. Families, including young children, were coughing, screaming, and running through clouds of tear gas, which officials claimed were deployed "because of the risk to agents' safety," CNN reported.

But does the migrant caravan present an actual real threat to U.S. border agents? Or the United States, for that matter? And why are they making their way to the states in the first place? Despite what President Donald Trump may tweet, the issue is far more complicated that sensationalized clips.

Trump has called the migrant caravan a "national emergency," and mobilized thousands of troops to "defend" the border, CNN reported. But a walking caravan of unarmed people is anything but a national emergency. Instead, it highlights a humanitarian problem, according to the Washington Office on Latin America — one that, in part, has been caused by decades of U.S. interventions in Central America.

Looked at another way: The number of people in the caravan would represent less than 0.10 percent of the documented immigration population in the United States currently, according to The Cut. So if every single one of those refugees in the caravan were granted asylum by the Trump administration, The Cut pointed out, it's "extremely unlikely" you'd even notice — or care. Hardly a national emergency, no?

Misconception #2: Criminals & Terrorists Are Using The Caravan For Cover

Trump has used this line to stoke racist and xenophobic fears in order to push his anti-immigration agenda. But it's far from the truth.

In short, the caravan is made up of a group of around 4,000 to 7,000 women, children, and men mostly from Honduras, Guatemala, and El Salvador crossing treacherous terrain throughout Central America to seek asylum in the United States, according to Vox. They are fleeing violence, poverty, starvation, homelessness, conflict, and other life-threatening conditions back home, and are coming to the states for protection and in pursuit of a better life.

But there's no evidence that known or suspected criminals or terrorists are hiding out in the caravan, a former senior intelligence official told NBC News. In particular, the U.S. Department of State reported in 2016 that there was "no credible information that any member of a terrorist group has traveled through Mexico to gain access to the United States."

Misconception #3: The Caravan Will Flood The Borders

Though it may be the largest on record, this isn't the first caravan to form in the Americas, CBS News reported — or other regions around the world, for that matter. And as with those other caravans, this one had begun to disperse before reaching the U.S. border.

It's typical for migrant caravans to splinter off as the journey progresses, creating smaller groups of asylum seekers, according to NBC News. These groups may continue onward to the United States, or seek asylum in Mexico. But there is no feasible way that every asylum seeker will show up at the U.S. border at the same time.

Several thousand people marching and staying together for 1600 miles is pretty much unthinkable.

Misconception #4: The United States Grants Asylum To Most Refugees

Refugees have to go through a long, arduous process before they can be granted asylum (international law prohibits the United States from turning away asylum seekers, according to CNN). Because the number of applications have skyrocketed in recent years, what once took 60 days can now take up to 60 months, according to PBS.

But there's no guarantee that at the end of those five years, asylum would be granted — and in fact, most people aren't. The United States rejected more than half of overall asylum requests by the end of fiscal year 2016, according to Syracuse University's Transactional Records Access Clearinghouse. And denial rates were disproportionately high for applicants from Honduras, El Salvador, and Guatemala — countries where most caravan members today originate. More than 75 percent of asylum seekers from those countries had their applications denied between 2011 and 2016, Clearinghouse data showed.

Misconception #5: Countries Let Caravans Form To "Get People Out"

Trump tweeted on Sunday that it would be "very smart" if originating countries stop allowing caravans to form. He also alleged in his tweet that caravans are "a way" for those regions to "get certain people out of their country and dump in U.S."

It's farcical to suggest caravans form at the behest of world leaders in order to offload their population on to another country — the United States, in particular. Caravans most commonly form because people are fleeing violence, conflict, or destruction caused by natural disasters in their originating countries, and coming together in large groups on their own accord makes crossing those hundreds or thousands of miles a bit safer, according to The Cut. It's not a grand conspiracy, despite Trump's insistence on social media.

In the same Sunday tweet, Trump asserted that the caravan is a "problem" that the Democrats "created." But that's not true.

Pinning the "blame" on Democrats is erroneous, at best. Trump has often framed the caravan as a consequence of lax immigration policy, admonishing Democrats for failing to pass legislation that would bolster border enforcement, according to CNBC.

The thing is, the Democrats' power in Congress had been weakened by Republicans since January of last year (that, of course, will change with the new congressional session). Republicans have controlled both the House and the Senate, and it's those in power who've failed to pass any immigration reform, or give the green light to funding for the border wall, as NBC News reported. More so, Trump's extreme immigration actions and policies have been curtailed by international law and federal court decisions protecting the rights of immigrants and people seeking asylum, according to NBC News.

In other words, Trump can't do what he wants not only because of his own party, but because what he wants would violate — and has violated — human rights. What's more: He ended an Obama-era plan backed by the United Nations that created a more streamlined way for certain asylum seekers from Central America to enter the United States, according to The Washington Post. That means, Trump's administration cut off access to one channel that would have allowed some caravan members to enter the United States without crossing the border.

But make no mistake: The migrant caravan is not a problem. Instead, it's the result of humanitarian crises happening throughout Central America. And propagating these myths do nothing more than put asylum seekers' lives in further danger.