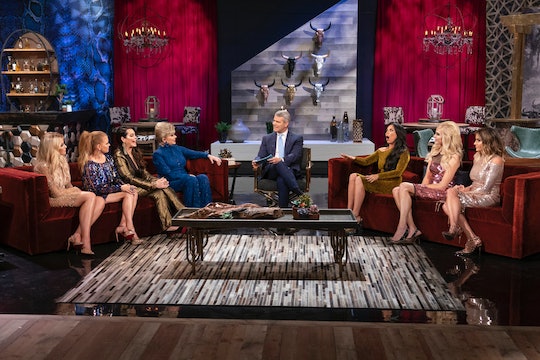 The seating chart is key at any Real Housewives reunion. It determines how close certain cast members are to their on-show enemies and it can also sometimes signal their importance. If they’re seated closer to either side of Andy Cohen, they might be considered of higher significance for the show. The Real Housewives of Dallas Season 3 reunion is the next upcoming special and fans are probably curious about what the RHOD reunion seating chart is. The entire season was one big ball of tension with argument after argument and new feuds popping up left and right. I’m still not sure who’s still best friends with whom on RHOD, but the seating chart should provide some insight.

The set up for this reunion puts LeeAnne on Andy Cohen’s left, followed by Kameron next to her, and Cary on the far end of the couch. On Andy’s immediate right side is D’Andra, with Brandi next to her, and finally, Stephanie. The seating arrangements for D’Andra and LeeAnne in particular is perfect since the two women had some of the worst issues this season. After LeeAnne made comments about D’Andra’s finances earlier this season, D’Andra went off on her and their friendship suffered.

Stephanie and Brandi have one of the close friendships from a season of heightened drama, so it also makes sense that they’d be seated next to each other. It’s no surprise that D’Andra and LeeAnne, the biggest scene stealers this season, got the coveted seats next to Andy.

In a video from backstage at the reunion taping, LeeAnne said that she was ready to face the other women and that she was "exhausted" after a season of fighting, backstabbing, and betrayal. It's all in a day’s work on RHOD, but what some viewers forget is that some of these women for friends for years before the show came along. These friendship breakups really cut deep.

"I’m feeling good, I'm feeling confident," Kameron said in the same video. "I have nothing to hide and I think some other people have some explaining to do… I’m ready." Kameron didn't have as much friend-related drama as some of the other women this season, but she was sort of put in the middle of D’Andra and LeeAnne’s mess.

She previously said on Watch What Happens Live that she wasn't taking sides, but also admitted that she didn't approve of D’Andra’s claims about LeeAnne’s fiancé being unfaithful. Don’t worry, though. While she’s not in one of the "hot" seats at the RHOD Season 3 reunion, she’s seated next to LeeAnne and close enough to the action to be dragged into the drama one more time.

LeeAnne and Brandi had drama of their own this season which came to a head with the chest poke heard around the world. Brandi confronted LeeAnne about allegedly calling Brandi and D’Andra alcoholics earlier in the season and when LeeAnne denied it again, she poked Brandi’s chest to get her out of her face. It was sort of fitting that they were dressed on theme like college students, because it wasn’t something you’d expect to see from adults.

Like the reunion, however, part of the RHOD cast’s job is to give in to the drama and to press issues more than people probably would in real life. The seating chart for the Season 3 reunion will make it possible for all of the ugly drama to come out once again and I seriously can't wait.