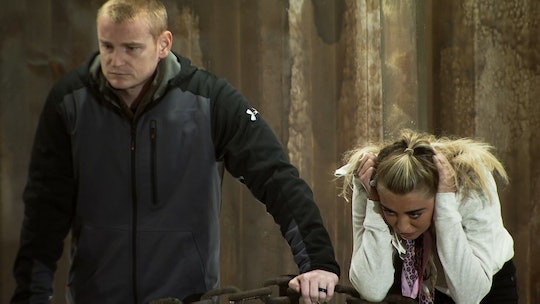 Only six players are left on The Challenge: War of the Worlds after giving their blood, sweat, and tears to get to the finale. The final challenge has already been a doozy so far, and all for a grand prize of $750,000. But in the preview for next week’s part two of the finale, TJ says that there will be a $1 million prize that players will share. So what is the second place prize on The Challenge this season? At the start of the season, the players competed with a partner to win half of the original $1 million prize, but when the teams were dissolved, TJ announced that one grand prize winner would take home $750,000. That leaves $250,000 up for grabs and it can go one of two ways.

Either one second place winner will take the rest of the money home or it will be divvied up for a second place prize of $200,000 and a third place prize of $50,000. It makes sense since there are six players left and one is about to be eliminated on a final Killing Floor challenge and having multiple winners isn't a new practice for The Challenge.

In fact, last season’s choice for Ashley to share the $1 million prize with Hunter or keep it all for herself was practically unheard of. Usually, there is more prize money given out to other players, so if that’s the case with War of the Worlds, it wouldn't be a total shocker. It would also be plenty fair, given the circumstances of the intense final challenge the remaining players have endured so far.

Wes, who is one of the most experienced veterans on the show, said that the 50-mile challenge the longest challenge in terms of miles that he can remember and the first half took the competitors almost six hours to complete. We saw Mattie give up when she was near the end of the challenge, Georgia pass out in delirium and have to be taken away in an ambulance, and Ninja Natalie momentarily pass out from exhaustion herself. Turbo finished the first half of the challenge in tears and Hunter barely made it through. It was tough and it’s only halfway over.

I’d say that giving a second and third place prize, or at least a second place prize, is more than fair considering how intense this competition has already been. It would almost be surprising if the players didn't have to share the $1 million. In The Challenge: XXX: Dirty 30, there were six winners who split the money in the end. Two first place winners each got $450,000, second place winners were each awarded $35,000, and the third place players got $15,000 each. There is almost always $1 million on the line, but more often than not, it’s shared among the top players. This season is no different, even if the grand prize is significantly higher.

Right now, the best of the best are still in play on War of the Worlds, so any one of them can still take home the biggest prize at the end of the second part of the challenge. Since Theo won the first half, he automatically gets a head start for part two and Turbo seems like he still has some fight left in him. Cara Maria might tap out early in the second half of the challenge since she didn't accept the IV fluids the other players welcomed to replenish themselves. Ninja Natalie definitely still has a fighting chance, though, as long as she isn't taken out in this impromptu elimination challenge at the start of next week's season finale conclusion.

I wouldn't hold it against any of these players to quit now after they already endured the most physically excruciating challenge I’ve ever seen. But with that prize money so close they can almost taste it, I have a feeling most of them will be giving it their all next week.