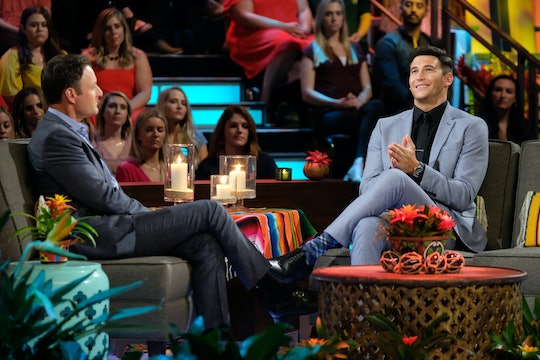 Blake went into Bachelor in Paradise under the assumption that he was getting his second chance at love after being sent home on Becca’s season of The Bachelorette. And if Caelynn hadn’t shown up to tell the other contestants about their Stagecoach hookup, he might have. Instead, Blake had a season of explaining himself to other Bachelor Nation stars and it continued after he went home. In an effort to defend himself, he released texts to prove his side of the Stagecoach story, but what texts did Blake post to Instagram exactly?

The Bachelor in Paradise star had a tough season and he’s probably ready to put the entire mess behind him. But back in August, he released the receipts to show that, from his perspective, he hadn’t tried to use Caelynn or ghost her after their hookup ahead of Bachelor in Paradise. He posted a handful of texts between himself and Caelynn to his Instagram stories in an effort to show his followers proof of what went down before and after Caelynn came to his hotel room at the Stagecoach music festival.

Before he released the screenshots, Blake made a separate Instagram post to say that he takes "full responsibility" for his actions at Stagecoach and that while he was sorry for the way he treated Caelynn and Kristina, he also said he was never in a relationship with Caelynn and never intentionally ghosted her after they met up.

The tweets were posted on Blake's Instagram stories, so they have since been automatically deleted, but Bachelor fans were quick to take plenty of screenshots which they tweeted out before that happened. The texts between Blake and Caelynn start at Stagecoach and show Caelynn asking Blake if she can come to his room. They go back and forth about her intentions and what will happen if they meet up and there is a lot of playfulness on both ends.

The texts pick up again before Blake and Caelynn are set to appear on Bachelor in Paradise Season 6 and both of them are worried about telling their fellow cast members they hooked up at Stagecoach. It's clear that word got out and Caelynn is trying to figure out "who knows" and how they know. She also mentions not wanting to tell people, but adds that she also doesn't want others to find out about it before she can get in front of it. It’s not unlike Blake's tactic this season when he arrived on Paradise.

The texts end with Blake checking up on Caelynn one last time and it seems like they both agree the dust has settled and they will be fine going into Paradise as a former hookup. But as viewers know, things changed as soon as Caelynn saw Blake again. She explained on the show that her confusion and concerns came rushing back when she saw him in Paradise and she was vocal about her feelings toward Blake.

Blake and Caelynn’s interactions on Paradise made for some uncomfortable first days for them both and, because Caelynn told other cast members how Blake’s actions made her feel, he found it hard to gain his footing and make a lasting romantic connection. Blake explained on Instagram he felt he had no choice but to release his text messages with Caelynn. Right now, however, the best thing he can probably do is stop talking about it.

I’m sure Blake will have to own up to everything on the Bachelor in Paradise finale special Tuesday night, but hopefully after that, he and Caelynn can both completely move past Stagecoach.

The Bachelor in Paradise Season 6 finale airs on Tuesday at 8 p.m. ET. on ABC.