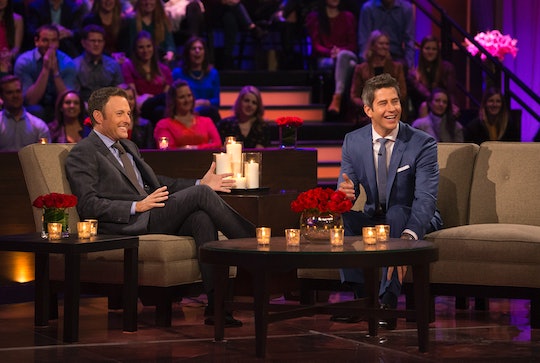 The only thing better than watching the Women Tell All special and then seeing the Bachelor propose is After the Final Rose, which is basically like a reunion show that directly follows the finale. This season, however, things are going to be a little different with a super-sized finale over the course of two nights to conclude Arie Luyendyk Jr.’s love story. But if that’s the case, fans are probably asking, what time does After the Final Rose start? Arie’s Bachelor season has been full of highs and lows and now it's going to get what looks like an epic conclusion.

Either way, that’s two nights of Bachelor content, ending in what Chris Harrison has claimed more than once will be game changing, monumental, and basically the wildest ending that they’ve had to a season of The Bachelor yet. I know he's basically paid to say those things, but with a two-hour finale and what is essentially a three-hour After the Final Rose, you have to assume that things are about to get intense and very real.

There have been tons of rumors and even (gasp!) spoilers floating around about how The Bachelor ends for Arie and his final two contestants Lauren Burnham and Becca Kufrin. Although you aren’t going to hear any of those spoilers from me, it does seem like whatever events transpired at the end of the season and beyond are the cause for the two-part After the Final Rose, which is likely meant to inform viewers and bring everything to a conclusion in real time.

During the Women Tell All, former contestant Caroline Lunny had a few choice words for Arie, essentially telling him that she knows what he did and that she doesn't understand how he could have done it. All very cryptic of course, probably thanks to a non-disclosure agreement the stars signed in order to be a part of The Bachelor. But Arie promises it'll be something viewers will see play out over the final episodes of the season.

Arie spoke to E! News after the Women Tell All taping and revealed that while he has things he wanted to say during the Women Tell All, they were things he's "waiting to do during the finale." He also said he thinks that "hopefully people will understand more" once they learn more about what happened to cause Caroline’s confrontation. "People are going to understand me a lot more and understand the ending and understand why Caroline's upset," he said. "But this is my journey and this is about finding a lasting love and that road is not always the easiest."

Since the first hour of After the Final Rose will likely air directly following The Bachelor finale on March 5, fans will get a first glimpse into how things went once filming was over. But it’s probably going to be on the second two hour part on March 6 at 8 p.m. ET when viewers really get to learn the intricate details about how things turned out for Arie.