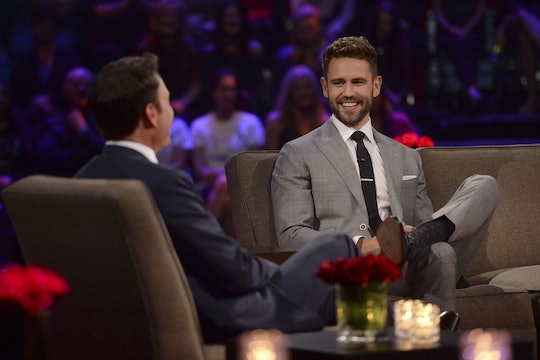 What would a Bachelor finale be like without the requisite after show to really give closure to everyone, right? This season will be no different, of course, but at this point fans are probably asking: what time does The Bachelor: After The Final Rose start? And who can blame them? It’s the hour-long live special that typically airs directly following the two-hour Bachelor finale, which will take place this year on Monday, March 13. But if you're looking for a more specific time frame (in case you're opting to forego the finale and go straight to the ATFR special), it's scheduled to kick off starting at 10:01 p.m. ET.

The best part about the special is that, unlike the show itself and unlike the Women Tell All special, it airs live, meaning that anything can happen once the cameras start rolling. The new promo for After The Final Rose has promised fans “a Bachelor first,” which could really mean anything, but it’s not surprising that they’re hoping to throw a curveball at viewers as a way to entice them to tune in.

Nick’s entire season of The Bachelor was full of surprises and shocking moments, with exes showing up and rose ceremonies being skipped for naps, and everyone getting away with it all. Then, it was announced that Rachel would be the next Bachelorette long before she was even sent home on the show, giving away a huge spoiler in the process. Maybe this “Bachelor first” will somehow make up for that?

In the promo, released exclusively to E!, you see Nick grappling with the decision to propose to either Raven or Vanessa and his worries that whoever he chooses might still say no. Then, the promo promises After The Final Rose will consist of a surprise that is backed up with an audience gasp. Typically, After The Final Rose tells fans whether or not the couple is still together and if so, what the wedding plans are. The next Bachelorette is also typically announced, but we all know how that went down this season.

There are also clips shown from the season and some of the finalists are interviewed by Chris Harrison and can even talk to the Bachelor himself. If Raven or Vanessa is dumped before a proposal, maybe the rejected contestant will be there to throw their fantasy suite date in Nick’s face, kind of like how he did with Andi Dorfman from her season of The Bachelorette? Or maybe we’ll finally get a live, off-the-cuff Bachelor wedding. OK, probably not that, but this “Bachelor first” will still probably be worth all the hype.