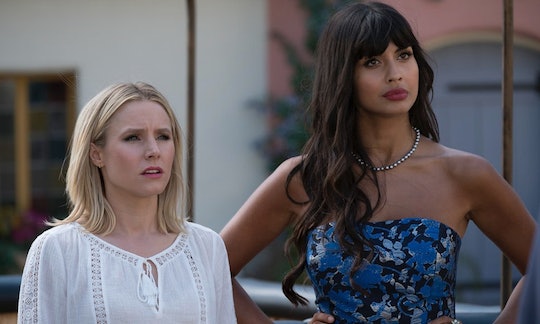 Eleanor and the gang returned for The Good Place Season 3 premiere with an hour-long episode, but don't get used to it. Now that Superstore Season 4 is also back, The Good Place will be pushed back to its original time slot and half-hour format. So, what time is The Good Place on? Tonight and for the rest of the season, The Good Place is on at 8:30 p.m. ET on NBC. Although that means The Good Place goes back to being a 30 minute show, fans take what they can get.

More Like This
Prince William & Kate Middleton Had A Cute Moment While Revealing They're On YouTube
Everything There Is To Know About The Friends Reunion
The Great-Granddaughter Of Alice In Wonderland Is Getting Her Own Show
Peppa Pig Is Going Camping In A New Live Show & You’re Invited!

So far, Season 3 has been a lot like the previous two seasons in that Eleanor, Chidi, Jason, and Tahani have no forking clue what’s going on. Just when viewers thought they were finally going to be sent to the Good Place at the end of Season 2, Michael sent them back to Earth to see if they could be better people if given a second chance at life.

The Season 3 premiere proved that no amount of charity work could ever rid Eleanor of her rudeness and that Chidi will always go back to his indecisiveness. But if the four of them can work together, they might be able to do some actual good and get themselves in the real Good Place before the demons of the Bad Place totally fork up Michael’s plan.

On the surface, The Good Place is a comedy full of smart and subtle humor with a unique look at the afterlife. But underneath is the running theme of morality, the question of whether or not people can change, and if good intentions are enough to earn you a spot in Heaven. I know, it’s pretty deep for a sitcom, but creator Michael Schur told Vulture that The Good Place is more than just your run-of-the-mill comedy.

"We have a comedy show with a dramatic premise," he said. "I don’t think that the show would be good if we were pacing ourselves. The whole point of this show in particular is that we’re trying to stay ahead of everybody. And the only way to stay ahead of everybody is to take things where you’re like, 'Oh, that’s a good season finale,' and say, 'No, that’s the end of Episode 3.'"

The Good Place is also all about unexpected twists. Just when Eleanor and the rest of her revived pals were starting to take the right steps toward being good people, Michael’s boss sent Trevor down to Earth to stir things up. In case you forget who he is, he was the demon who’d originally arrived during Season 2 to take Eleanor to the real Bad Place so he could torture her for the rest of eternity. So his sudden entrance on Earth during Chidi’s near death experience study is bound to throw a wrench in Michael’s plan to ensure the gang’s fate in the afterlife.

In a clip from Episode 3, 'The Brainy Bunch,' Michael refers to Trevor as "a diabolical sadistic agent of evil" and "the single most dangerous creature in the universe." This is followed by a scene of Trevor offering the group lemon bars back down on Earth, but it’s obviously all part of the Bad Place’s mission to keep these four individuals from getting sent to the Good Place in their next afterlife. Somehow I think good will prevail, but not before Eleanor and her friends are tested again (and again).