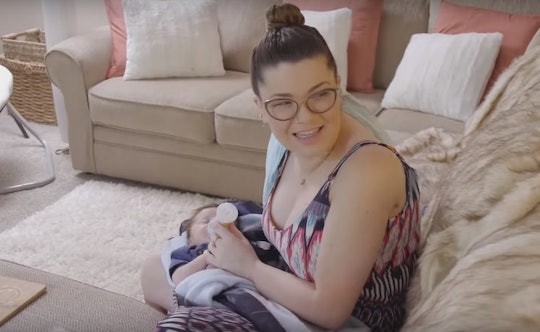 Mondays are a mother. At least that’s what MTV says every season when Teen Mom OG premieres on Monday nights. And this time around it's no different, but what time is the Teen Mom OG Season 8 premiere? You aren't going to want to miss a minute of the drama, especially since it’s a two-hour premiere. It all starts at 9 p.m. ET on MTV and there’s a lot of ground to cover.

Most fans have been with the "original girls" of Teen Mom OG since the beginning. And now, eight seasons after they graduated from being 16 and pregnant to teen moms with a show of their own, things are about to change. After seasons of ups and downs and threats to leave the show, Farrah Abraham will not be returning in any capacity and instead, there are a couple of newcomers to the cast for the very first time.

Bristol Palin, Sarah Palin’s daughter, joins as another young mom who was once a teen mom herself, though she wasn't part of either of the original shows in the franchise. And MTV alum Cheyenne Floyd, who appeared on both Are You the One? and The Challenge also joins the ranks of the OG cast members. The new additions alone are bound to shake things up when Season 8 premieres Monday night.

Floyd’s time on MTV goes back a few years to when she met her 16-month-old daughter Ryder's father on The Challenge: Rivals III and before that, she’d appeared on Are You the One?. Things are a little complicated with her baby’s father and ex, Cory Wharton, at the moment, but it comes with the territory of an unplanned pregnancy. So while technically she wasn't a teenager when she became a mom, Floyd’s story is bound to be reminiscent of the other OG moms’. But, she told Us Weekly, that’s her goal going into the show.

"I think that there was a lot of questions regarding my pregnancy from the beginning when I got pregnant. It will be interesting to now tell people what actually happened," she said. "Everybody knows that Cory didn’t find out about Ryder until she was six months and now everyone’s questions will get answered as to what actually happened."

It’s unclear how much will be revealed in the season premiere, but there is a whole season ahead for for fans to get to know Floyd’s story.

Palin’s own story of a young unplanned pregnancy probably isn't new to many viewers. Her mom was in the public eye for years before Palin was a part of the Teen Mom OG cast, so for the most part, fans may already know about her first child she had when she was a teen. Now, years later, she has two more kids and, as seen in the Teen Mom OG Season 8 trailer, her storyline is going to revolve around marital issues with her husband of two years.

The rest of the OG cast have been up to plenty to fill in the two hours in the season premiere Monday night. Catelynn Lowell recently announced her pregnancy and while that may have happened after Season 8 finished filming, viewers might get to see her discussion with husband, Tyler Baltierra, about trying to expand their family.

Speaking of new babies, Season 7 left off with Amber Portwood in probably the best place she’s been in years, pregnant and ready for the excitement and challenge of a new baby. Season 8 will likely show Portwood giving birth and adjusting to motherhood all over again.

Honestly, two hours probably isn't enough time to quench my thirst for Teen Mom OG drama, but for now, it will have to do.