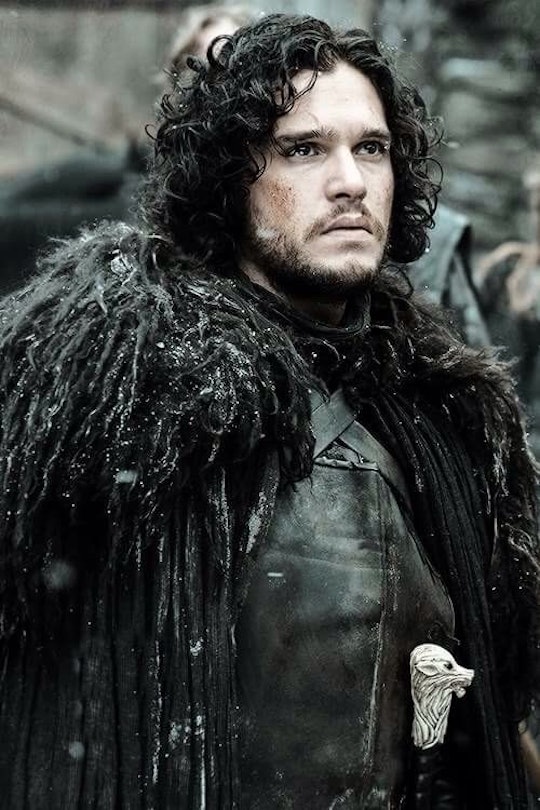 What Was Melisandre’s Azor Ahai Prophecy On 'Game Of Thrones'? Jon Snow Is Important To It

According to Melisandre, the red witch we've changed from despising to needing desperately for the resurrection of Jon Snow, Azor Ahai is basically the second coming. He will be the warrior to lead their world and defend against the White Walkers. But, what did Melisandre see in the flames and who is Azor Ahai going to be now that Jon is awake and the throne is crumbling? When Melisandre first appeared in Game of Thrones, as an advisor of sorts to Stannis Baratheon (oh yeah, and lover too — remember that black smoke baby thing?), she was sure that he was meant for the throne. She'd seen it in her flames, after all, so it was meant to be true.

The new ruler that Melisandre saw in the flames is going to be Azor Ahai reincarnate, the Lord of Light she's always going on about. And while she once claimed that Stannis was this Azor Ahai lord, now that he's gone, she's set her sights on Jon Snow. Who, let's be honest, has burned a lot less children at the stake and would make much more sense as a bringer of light to fight the darkness. Her prophecy, as stated in the books, talks about a never ending night that comes with the winter that everyone is always talking about:

She also says that in order to fight against the darkness, Westeros must unite under its one true king. And, as most of us have come to agree, Jon Snow is the one true king of Westeros. Melisandre's prophecy also says that Azor Ahai, or the Prince That Was Promised, will be born again "when the red star bleeds and the darkness gathers... Amidst smoke and salt." Her prophecy also has a bit to do with dragons, making Jon Snow an even stronger candidate for coming back as Azor Ahai reincarnate, if R+L=J is indeed true and he does have Targaryen blood.

Basically, the prophecy says that whoever Azor Ahai is must somehow be linked to seven important things — a star, salt, smoke, sword, sacrifice, stone dragons, and Targaryen blood.

While Melisandre tries her damnedest to make Stannis out to be Azor Ahai reborn, after the ceremony at Dragonstone which entails burning of statues of the Seven, and even after convincing him to sacrifice his daughter, he still ends up dying, making it impossible for him to be the second coming of this great leader they all need.

In Season 4, long before Stannis is done in at the hands of Brienne The Awesome (wait, that's not her proper name), Melisandre already sees clues of Jon Snow's possible fate when she says, "I look into the flames and all I see is snow." Which, OK, doesn't necessarily mean Jon Snow, but it's just another part that leads up to her realizing the true prophecy of Azor Ahai and who he will be. It goes even further when, in Episode 10 of Season 4 of Game of Thrones, when she literally sees Jon Snow in person for the first time through the flames and smoke in the courtyard of Castle Black.

Of all the characters currently still alive in Westeros, the best and most logical contender is easily Jon Snow. And something tells me that when we (hopefully) see the business of the Tower of Joy in an upcoming episode, we'll have even more reason to believe Melisandre's prophecy about Azor Ahai.