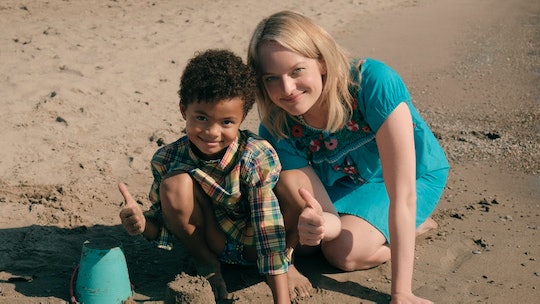 Hannah's Whereabouts On 'The Handmaid's Tale' Are Still A Mystery

Like any mother, June’s driving force throughout season one and two of The Handmaid’s Tale has been finding her daughter and getting her out of Gilead. As we’ve seen, literally no class of woman is safe in the society within the hit Hulu series, so naturally, June has held onto the hope that somehow she can find Hannah and get her over the border to Canada. But since we’ve seen so little of the girl in present day on the show, it makes you wonder, what will happen to Hannah on The Handmaid’s Tale? She’s been separated from June for literal years now and there is the possibility that she’s forgotten about her former life for the most part.

If Hannah was five years old when Gilead came to be and she was ripped out of June's arms, then she’s around eight or nine now and in those few years, she could have been trained in the ways and religion of the new country they live in and, as a result, any mention of her parents from "before" might make for foggy memories at best. I know, as if the show couldn't get any more dark and heartbreaking, but chances are, things will continue to look pretty dire for a while before there are any big wins for our main heroine and her family.

When Serena took June to see Hannah at the end of season one, Hannah was in what looked like a school or boarding school of some kind. And by see Hannah, I mean watch helplessly from the inside of a car while Serena sat and talked with her daughter, whom June hadn't seen in years at that point. For the most part, Hannah seemed like she was healthy and taken care of and if the school was like the child equivalent to the Red Center, it could have been a place where Hannah was already learning about the importance of children and procreation in Gilead.

One thing that likely will not happen to Hannah, though, is being groomed to become a handmaid someday. The handmaids of the show were made as such because before Gilead came to be, they were women who had broken the law in some way, or in the eyes of the Sons of Jacob, and were also fertile. Their way to give back to society was to become handmaids. Since Hannah is just a child, she likely isn't being trained for that kind of life thankfully, but she may not have an easy road of ahead of her regardless.

Since it's been so long since June has seen Hannah and vice versa, Hannah may very well already be indoctrinated into the beliefs of Gilead. Take Eden, for instance. She’s just 15, so she was probably around 11 or 12 when Gilead took over the government. If she’s already so dedicated to being a subservient wife to Nick and she no doubt remembers well the time before all of this, then there’s a good chance Hannah might already be trained for her own marriage in the coming years.

Then again, Hannah could still get out of Gilead by the end of the season, even if June has to sacrifice her own freedom in order to make that happen. It’s honestly the best case scenario for Hannah at this point. Even if she has had the Gilead beliefs shoved down her throat daily for the past few years, she might still stand a chance if Nick gets her out of the country and to Canada where Luke and Moira are.

Another strong possibility is that Hannah was taken into a home of one of Gilead’s prominent families and has been cared for in that way since the end of season one. When Omar the bread truck driver helped June try to escape, he and his family were punished direly. As Aunt Lydia explained to June, Omar was killed while his wife was turned into a handmaid and their son was adopted into another family. This could be the case for Hannah, especially since she’s still so young. Again, it's not the happiest outcome for June since she’s been struggling to find her and live without the knowledge of where her daughter even is, but it’s definitely a possibility.

The whole idea of Hannah being brainwashed with the ideals of Gilead could be a great, if still dreary, story line for season three. All this time, June has assumed that she’ll find her daughter and escape to Canada, but what if Hannah is so far gone that she completely rejects her when and if the time comes? As if this show hasn't already given us all a million reasons to sob every week.