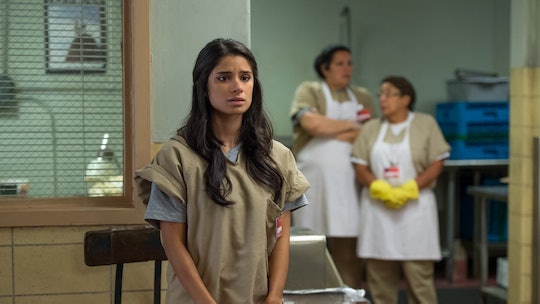 Maritza Faces Deportation On 'Orange Is The New Black'

The last time fans saw Maritza on Orange Is the New Black, she was being separated from her best friend and YouTube co-host, Flaca. When the dust settled, it was revealed that she was placed somewhere far away from the rest of the former Litchfield inmates. And when Maritza finally made her reappearance on the show in Season 7, viewers saw that she was actually out of prison, and had learned from her mistakes. Then she was thrown in ICE detention and now, What will happen to Maritza on Orange Is the New Black.

While out on parole, she considered leaving the state to see an NBA player in Los Angeles on the hope that she wouldn't be unexpectedly called in for a meeting with her parole officer. Maritza didn't go and, in turn, didn't violate her parole, but she still got a raw deal when an ICE task force raided the club she was at. The first thing she said was she didn't have her I.D. with her, which made it impossible to prove to the officers that she is an American citizen.

Despite repeatedly telling the officers and then guards the same thing, she was sent to the same ICE detention center where Blanca is. Now, because of her Latina heritage and the fact that she can't outright prove that she isn’t illegal, Maritza faces deportation in the same way Blanca does.

Right now, Maritza’s fate is up in the air. She couldn’t have predicted that the club she had been at multiple times before would get raided. In the past on OITNB, Maritza was close to Flaca and other Latina inmates, but she never came out and said that she was an illegal immigrant in the U.S. because she didn't know she was. Her mom led her to believe she was for her entire life and now that lie has caught up to Maritza.

Diane Guerrero, who plays Maritza, has real life experience with deportation, though this isn't exactly a case of art imitating life. She was never deported, but, she wrote in a Los Angeles Times article, her family was deported when she was 14 years old. She described growing up with parents who tried to become legal citizens, but had lost money to attorneys who, in the end, did nothing to help their cause.

"One day, my fears were realized. I came home from school to an empty house. Lights were on and dinner had been started, but my family wasn’t there," Guerrero wrote. "Neighbors broke the news that my parents had been taken away by immigration officers, and just like that, my stable family life was over."

She explained her parents were placed in detention in Boston and she visited them until they were deported back to Colombia. On OITNB, her character’s story isn't exactly the same, but Maritza does face unfair deportation after spending her entire life (or the majority of her life, as far as viewers know) in the United States. She never mentioned being in the country illegally before and what little fans have seen of her backstory, it looks like she grew up in or around New York as a legal citizen. But if she can't prove that, Maritza could be deported on OITNB.

If Maritza could prove that she is in the United States legally, then she would be released from the detention facility. Cases like this pop up frequently enough to show that what happened to Maritza does happen in real life. An 18-year-old high school senior from Texas was recently released from U.S. Customs and Border Protection after spending almost a month in custody under accusations that his U.S. documents are fake.

However, unlike the situation Maritza faces right now, the young man in that case was legitimately a citizen. Maritza’s story could end with her freedom, especially since she didn't know she wasn't born in the United States. But I have a feeling she will raise hell even if she is released.