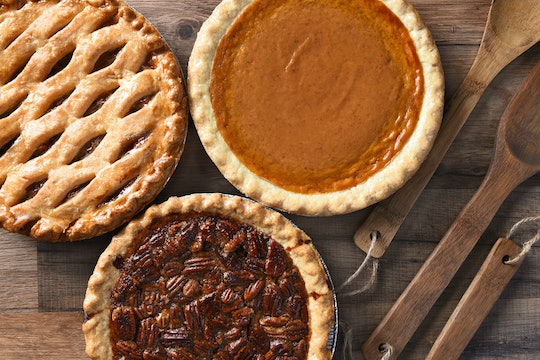 What Your Favorite Thanksgiving Day Pie Says About You

For as long as there has been internet, those of us who frequent the shadow corners of the world wide web have fallen into teams: Team Jennifer or Team Angelina, Team Jacob or Team Edward, Team Tampon or Team Menstrual Cup. But perhaps no battle has been waged more furiously than the battle between Team Pie and Team Cake. Thanksgiving, however, has been claimed, now and forevermore, by Team Pie, and it turns out your favorite Thanksgiving Day pie says a lot about you.

Let me just say that it there is nothing more tragic than seeing good people become so blinded by self-righteousness, they fail to eat literally all the baked goods made available to them on the most gluttonous day of the year. There's room in your belly for all the pie, you guys. However, I do understand that your Thanksgiving Day meal choices are no laughing manner, and such decisions should be given careful consideration. So, if you forgo eating all the things because you want to make sure you're accurately represented, I get it. I'm with you. I totally understand. Not everyone has the time to take one of those online quizzes in an attempt to learn something about themselves. So, on Thanksgiving, you can just pick a pie and make a statement (while eating delicious treats which is, of course, the dream).

So as you settle in and prepare to stuff your face with a delicious meal, take a moment to stop and think about your choices and what they're telling that one family member who didn't vote this election. I mean, what are the holidays for if not to take subtle jabs at estranged family members, right?