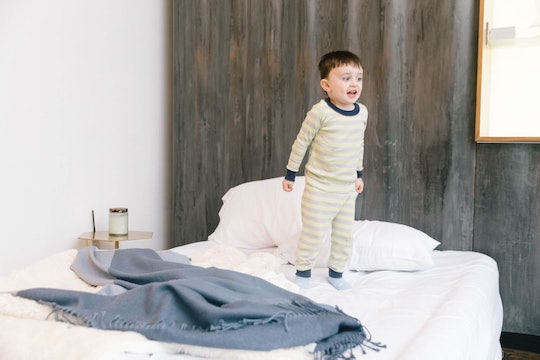 Some phrases are dangerous. For example, if someone says "I'm fine" after an argument with their partner, that's dangerous. If a Southern girl just stares at you and says "Bless your heart" that's dangerous (look it up). But perhaps the most dangerous phrase of all is when a toddler look up at you with their big shiny eyes and says, "I'm not sleepy." Why, you ask? Well, because what toddlers mean when they say they're not sleepy is never, ever going to turn out well for you.

My 3-year-old daughter has this really hilarious habit. At about 8:15 p.m., after two stories, kisses, cuddles, and tucking her into bed, she waits for me to go downstairs to (finally) sit after a long day and then toddles out of her bed and giggles. I ask, "Why are you up?" and she responds, saying, "I have to go potty!" That's how she buys five minutes, you guys. Most of the time she doesn't pee.So she goes back to bed, I come back down, and she toddles back out. "Why are you up?" "I have to poop." Another five minutes, people. Most of the time she doesn't poop.

Repeat with any number of stupid excuses (including just giggling and running back to her bed) until she finally just plops down at the top of the stairs, starts crying, and says "I'm not sleepy!"

See? Like I said, hilarious! So very, very hilarious. So hilarious, in fact, that I'm rocking back and forth a little just thinking about the fact that I will inevitably have to deal with this crap tonight. Again. And probably forever, because this is what my daughter actually means when she says she's not sleepy: