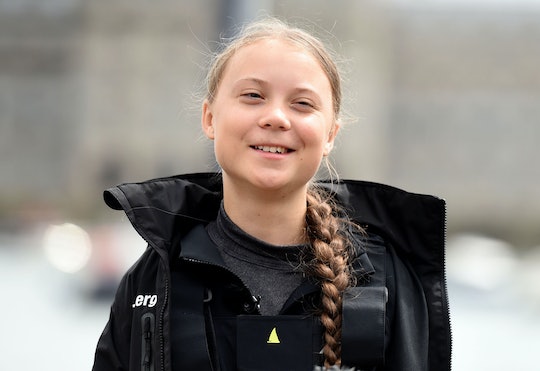 Greta Thunberg is not here for anyone's accolades and yet the 16-year-old Swedish climate change activist is winning prizes whether she likes it or not. Because she is out there walking the walk better than any adult when it comes to going after policymakers and politicians to do better for the environment. She's fearless, focused, and determined — she deserves every ounce of praise heaped upon her. And her latest prize, an alternative Nobel for climate change activism, is perhaps the most prestigious yet. If you're wondering what an "alternative Nobel" prize is, you're certainly not alone. But trust me when I tell you that Greta Thunberg has earned it.

The alternative Nobel prize is actually called the Right Livelihood Award. This award was created in 1979 by Swedish-German philanthropist Jakob von Uexkull in an effort to "support people fighting for a just, peaceful and sustainable world." He initially suggested that the Nobel awards should include an award for environmental activism and one to "promote knowledge and perspectives of people in poor countries," according to the Right Livelihood Award's website, and after it was rejected this new award category came into fruition.

The Right Livelihood or alternative Nobel award has become one of the most prestigious awards to honor people fighting to make the world more sustainable, more peaceful, and more just. In other words, people like Greta Thunberg.

The 16-year-old is the youngest of the recipients, but her age is actually one of the most significant elements of her activism. After all, she first became a serious presence on a global level when she initiated a school strike outside Swedish parliament in 2018 at 15 when she believed politicians simply weren't doing enough to effectively heal the environment. Those global climate strikes have taken off across the world as #FridaysForFuture with students and adults to raise awareness of climate change.

As the passionate young activist continues to work towards a more sustainable future, she never appears to falter from her goal. And, as Ole von Uexkull, Executive Director of the Right Livelihood Foundation, noted in a statement about the Right Livelihood Laureate: "With the Award to Greta Thunberg, we honor one of the most effective civil society leaders of our time and celebrate the power of every human being to make a difference."

Thunberg was quick to point out in a statement regarding the Right Livelihood award that she is in no way alone in her fight for a better future. According to TIME, she said: "I am part of a global movement of school children, youth and adults of all ages who have decided to act in defense of our living planet. I share this award with them."

This isn't the only Nobel the young activist might take home in 2019; she has also been nominated for the Nobel Peace Prize, according to Reuters.

While I'm certain there Thunberg would be thrilled on some level to win such weighty awards, I also think a part of her would shrug it off. Because she knows what her goal is and she never strays from it: Climate change. A better future for her generation.