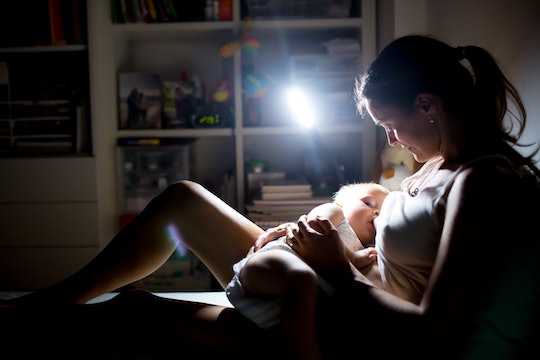 Sorry, But The Best Time To Boost Prolactin Might Be Your Least Favorite Time

During pregnancy, a woman's body produces higher levels of prolactin, which plays an important role in breastfeeding. You'll get a big boost of the hormone immediately following birth, but what about after that? After that initial surge, the best time of day to boost prolactin levels is (unfortunately) during those late-night feedings.

As you're no doubt well aware, hormone levels change dramatically during pregnancy, particularly progesterone and estrogen, and prolactin is significantly impacted as well. "Production of prolactin takes place in the pituitary gland in the brain. For those who are not pregnant or breastfeeding, there are only low levels of prolactin in the body," lactation expert Natalie Ward, BS, IBCLC, RLC, tells Romper. "During pregnancy, a woman’s body starts to produce higher than normal levels of this hormone, causing the mammary glands to begin preparation for milk production."

After delivery, progesterone levels plummet, prompting the body to start producing milk in response to the high levels of prolactin, according to VeryWell Family. At birth, Ward says, prolactin levels are at their highest, then "decline over the next few months." However, she notes, "increased levels of [prolactin] are critical to maintaining an adequate milk supply for nursing mothers," so they need to take steps to try to boost their levels as much as possible. The first step is to start breastfeeding and doing skin-to-skin time immediately after delivery, because the more a baby feeds, the more stable hormone levels will be.

After those first initial feedings, moms can help boost and maintain their levels of prolactin by keeping a regular feeding schedule, especially at night. "Levels of this hormone rise with suckling, therefore the more feedings, the higher the level of serum prolactin," Ward explains. "Prolactin levels have been observed to follow a 'circadian rhythm,' meaning levels during the night are higher than during the day... [so] do not skip night-time feedings," she adds, despite the obvious temptation to do so.

In addition to its role in milk production, prolactin also promotes bonding between a mom and her baby. The physicians at Kansas City OB/GYN say the "raised levels of prolactin and oxytocin" cause breastfeeding mothers to "feel deep feelings of attachment, calm, and rushes of contentment or euphoria" as they hold their baby. So keeping prolactin levels up is important in that regard as well. Aside from regular feedings, Ward suggests "putting baby to breast frequently, holding baby skin-to-skin as much as possible, [and] incorporating breast massage during feedings to increase stimulation and spur baby’s intake."

Two of the most important things to encourage a baby's growth and development, both physically and mentally, are creating a strong bond and keeping them nourished. Doing what you can to boost your prolactin levels will help you to meet both of these goals, which makes the loss of sleep a little easier to accept.

More Like This
D-Mer Syndrome: Will It Come Back Again?
Baby Growth Spurts: When They Happen & What To Expect
25 Winter Solstice Baby Names For Your Magical Little One
6 Bizarre Superstitions About Christmas Babies