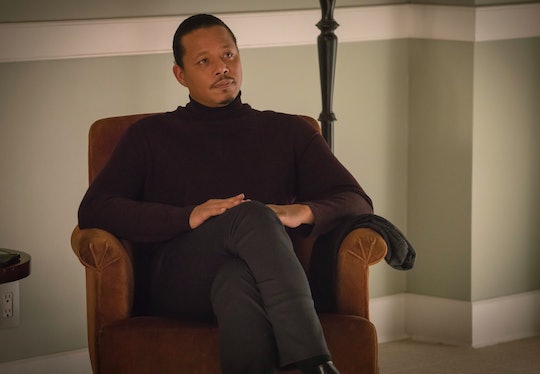 Even though it totally seems like Empire has been on for way more than three seasons, it wasn’t all that long ago that Lucious was battling what he thought was ALS, but now it looks like something else has come up to affect the Lyon patriarch’s health. So, what’s wrong with Lucious on Empire? His health isn’t looking good and only seems to be getting worse. When he started coughing a lot during the most recent episode, the immediate response from some of the other characters was whether or not his ALS had returned, even though he was wrongly diagnosed in the first place.

The topic of Lucious’ health was kind of brushed off since there were bigger issues immediately at hand. With all of the Lucious and Cookie flashbacks though, could this mean that Empire is gearing up to finally kill off Lucious?He’s been on the brink of death before and was even smothered by Cookie once. Now, judging from the promo for Episode 13, "My Naked Villainy," Anika is the one threatening him at his bedside. As far as what’s wrong with Lucious, though, he’s obviously hooked up to oxygen for a reason and definitely doesn’t look like he's doing all that well.

What Lucious does have is Myasthenia Gravis, which has symptoms similar to ALS and is much more manageable and treatable. Some of the symptoms include difficulty breathing, blurred or double vision, and difficulty chewing and swallowing. All of that seems to be in line with the beginning of what Lucious is going through physically, so it’s likely his disease is what causes him to be hooked up to all of those machines and suddenly in critical condition. Whatever is wrong with Lucious this time around could just be a flare up of the disease, or it could be part of something more serious. Either way, it looks like he’s about to finally see Anika’s true colors.

The only reason Anika married Lucious was to make it impossible for her to have to testify against him, should the FBI finally take him down. It was also a roundabout way to secure her place in the Lyon family at a time when no one wanted much to do with her, pregnant or not. She probably won’t succeed in actually killing Lucious, but if and when he recovers, he’s definitely going to be coming after her.

It’s hard to take seriously the idea that Lucious could die on Empire, but whatever is wrong with him might leave the music mogul out of commission for a while, giving everyone in the Lion family the chance to run amok while he’s bedridden. As bad as he is, it’s never good when Lucious is down.