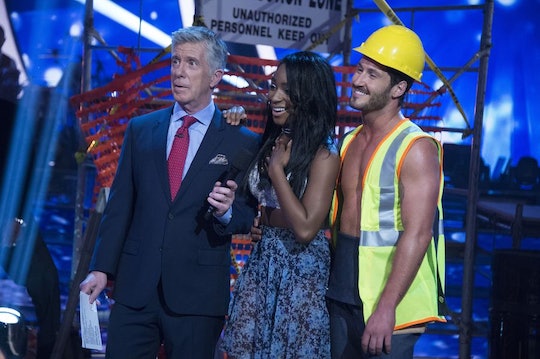 There's no doubt that this season on Dancing With the Stars, Normani Kordei has been a strong competitor, earning high scores and glowing remarks each week. But at the start of Week 7, it was revealed that she hurt herself during rehearsals, so what's wrong with Normani Kordei's back on Dancing With the Stars? Simply put, she's been working her body extremely hard in the past few weeks, pushing herself to improve, and although it's clearly paid off, she's still faced strains on her body.

Before her performance with Val Chmerkovskiy on Monday night, Kordei admitted to having body aches and pains as of late. "My back has been killing me, my hip's been killing me," the singer said. And even after getting an X-ray on her lower back, she decided to tough it out and power through for the double elimination night.

"This is actually the most unprepared I've felt," Kordei admitted. "I'm gonna fight through it, because I just wanna be the best, even if it hurts." Technically, she was the best Monday night on DWTS, earning a perfect 40/40 and immunity for herself and Chmerkovskiy. But the strain she's put on her body, though the doctor recommended taking medicine for it, clearly wasn't something she would let slow her down for the competition.

Each week this season, Kordei has earned high scores, so it wasn't a big surprise that she earned a perfect score in Week 7 with the totally sexy and romantic Argentine tango. But it was surprising that even with Kordei's back injury, she was able to get out on the ballroom floor and be amazing each step of the way.

After Kordei's performance, judge Carrie Ann Inaba said that it was "pure, beautiful artistry" and told Kordei, "It's an honor to watch you dance." Seriously, can it get any better than that, especially for someone who not only has a lower back strain but is working through the pain?

When Kordei saw her doctor on Friday, he told her that in order to stay in the competition, she'd need to be on medication and also modify the choreography with Chmerkovskiy. But I think I speak for most fans when I say that whatever modifications were implemented, they still worked for her. Kordei's performance on DWTS, even with her back injury, was amazing. And not just for someone who had to do it through pain. She was amazing overall.