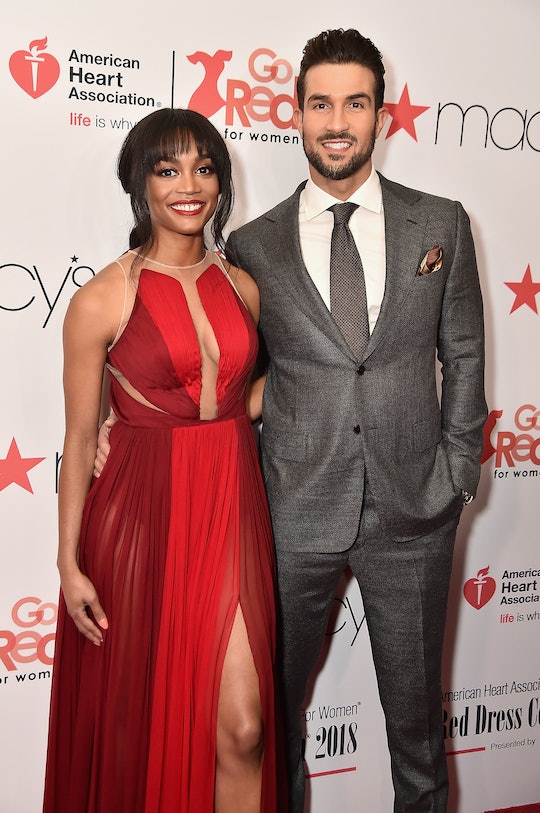 After being engaged for just under a year, it looks like Rachel and Bryan are busy making wedding plans, which might be surprising for Bachelor fans who have seen plenty of couples leave the show hand in hand, but announce a break-up several months later. (Looking at you, Nick Viall and Vanessa Grimaldi!) At the end of 2017, Rachel and Bryan spoke to Entertainment Tonight about their upcoming nuptials and although they didn’t have a set wedding date to announce, Rachel did reveal that despite not being "the wedding planning type," their intention is to be married sometime in 2018.

Without an actual date, it's hard to guess when they’ll actually have their ceremony, but Rachel did admit that at one point, they’d consider winter, and at another point fall, so fans could see Bryan and Rachel get married closer to the end of the year.

When Bryan spoke to Extra, he echoed his future bride’s plans for their post-Bachelorette wedding. "We haven’t set anything yet," he admitted, adding:

We definitely want to get married this year, and that’s the plan. 2018, it’s gonna happen. The only thing is the details haven’t been worked out. Rachel isn’t much of a planner, so she’ll kind of deal with it as it comes along, but, you know, right now, we’re just taking our time.

Although he also didn't have a precise date to give out, Bryan did reveal that there could be more than one ceremony, given the proximity of their respective families, as hers live in Dallas and his live in both Miami and Colombia. "Two locations, maybe Dallas, maybe Colombia? We don’t know," the former Bachelorette contestant said. "Colombia has come on to the radar recently."

One thing you can be sure won’t happen is a double or triple Bachelor-sized wedding starring Rachel and Bryan, JoJo Fletcher and Jordan Rodgers, and Shawn Booth. Entertainment Tonight’s Lauren Zima spoke to Rachel at the Wedspire's Wedspiration 2018 event in January about the possibility and the former Bachelorette was quick to shut that down right away.

"I'm not a diva, but it's my special day," she said, and understandably so. "I've never been married before, and I don't plan on having a wedding with multiple people. I Love Kaitlyn, love JoJo, but I think we would all want our separate day so I think that's just a rumor.” She also said that while she and Bryan haven't decided yet if their wedding will be filmed, and "if that's gonna work," they’re still deciding on that.

Most recently, Bachelor in Paradise alums Carly Waddell and Evan Bass got married on a special episode of the show during the filming of Season 4 and continued to give hope to the contestants who were actively looking for love on the show. Maybe Rachel and Bryan will allow their own wedding to be televised to lend some hope of their own? The clearly in love couple seem set on getting married later this year, so I would imagine that fans should keep an ear out for an official announcement. But whether or not the epic wedding will be televised, Bryan and Rachel are getting closer to making things official.