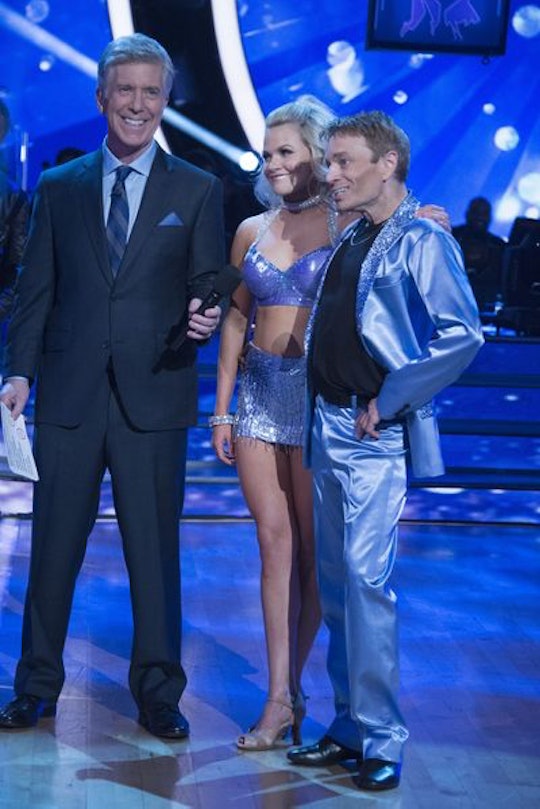 Chris Kattan Opened Up About His Injury On 'DWTS'

Chris Kattan isn't the oldest contestant on Season 24 of Dancing With the Stars by any means, but he's another one who is working on his routines after dealing with serious health issues that may have prevented him from doing this years ago. In the premiere episode he talked a little bit about a past injury, but when did Chris Kattan break his neck? DWTS had the contestant open up about his injury and I think everyone was touched by his story.

When Chris opened up about his neck injury that he suffered 14 years ago, he was visibly upset as he explained that it made him feel like less of a physical comedian, as he'd been for so many years before his injury. Since Chris' neck injury, he's had four surgeries, so the fact that he even agreed to compete this season on DWTS is kind of a huge deal that you have to give him props for.

Chris credited his neck injury to work-related accident, but during his second performance on DWTS, he proved that even without doing flips on the dance floor, he can still move and entertain enough to get decent scores. Then again, Outkast's "Hey Ya" will do that for you.

Chris told People that he had been asked to do DWTS before but until now, he didn't think his body was ready for it. And during the time when he was recovering and going through multiple surgeries, he felt like he couldn't really go anywhere. When you have surgery, you’re out of commission for months," Chris told the magazine. "It’s embarrassing. You cant go out in public."

You could tell how hesitant and worried Chris was for his first number on the season premiere of DWTS, but for Week 2, you could already see the confidence start to grow in him as a dancer. And as he brought both the dance moves and humor for "Hey Ya," he managed to bring the funny yet again in true Chris Kattan form. Like he said, this is something he might not have been able to do five or 10 years ago and now that he is, he deserves all kinds of credit for it.

Week 2 of Season 24 of DWTS saw a score of 22 for Chris and Witney, up from 17 from their first night as a team, so they were already getting better. It definitely makes you root for the former Saturday Night Live star more than ever, though, sadly, he was the one who ended up getting eliminated by the end of the night.