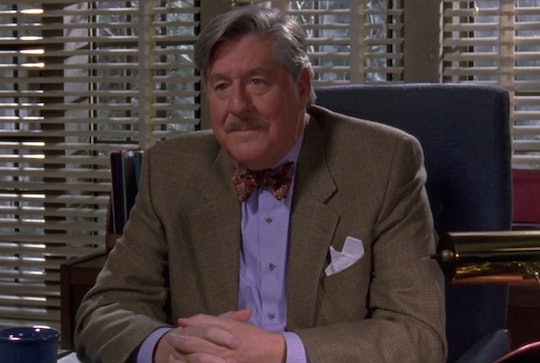 When Did Richard Gilmore Die In The 'Gilmore Girls' Revival? There Will Be A Funeral

Long before the official Gilmore Girls: A Year in the Life trailer was released, we all knew that Richard wouldn't be returning along with the rest of the cast, since the man behind Rory's grandfather, Edward Herrmann, died in 2014. But it didn't make it any easier to see the quick flash of a funeral in the trailer and to witness Emily Gilmore as we've never seen her before. (I.e., in jeans.) But when did Richard Gilmore die in the Gilmore Girls revival?

Amy Sherman-Palladino revealed in an interview with TVLine that the first part of the Gilmore Girls revival will see each of the three Gilmore ladies tackling new chapters in their lives, including Emily. So we'll likely be seeing Richard's funeral right away when the four-part special premieres on Netflix. Of course, no part of that makes any of this easier, though, since losing Richard is going to be something we all feel along with Emily. Obviously with Herrmann having passed away in real life, there will be no real closure for fans who grew up with and loved their TV Grandpa Richard, but from the very start of the Gilmore Girls Netflix revival, we're going to be dealing with the loss of Richard and seeing how his absence plays a role in the lives of Emily, Lorelai, and Rory.

For the entire run of the series, Richard was a presence, even when his marriage was on shaky ground with Emily or he was battling health problems that scared her, despite anything else they were going through. But his death is not only going to be heartbreaking for fans to go through again, since it will bring up old, residual feelings from when the actor himself died, but it will also show us a different side of Emily, who we've never seen go through something this monumental and life changing. And you can't help but hope that somehow his death will give her a new piece of herself to explore, as a strong, independent woman.

In the newly released trailer for Gilmore Girls: A Year in the Life, we see Emily in some moments of vulnerability as we flash on a funeral scene, and she says, "I don't know how to do this. I was married for 50 years. Half of me is gone." Chances, are, since we sadly don't have the actor to play the role before his character's death, Richard is going to die at the beginning of the four-part continuation, and we'll have the rest of the series to watch Emily work through the loss while we do it right along with her. The Gilmore Girls revival will be available for streaming on Netflix on Nov. 25.