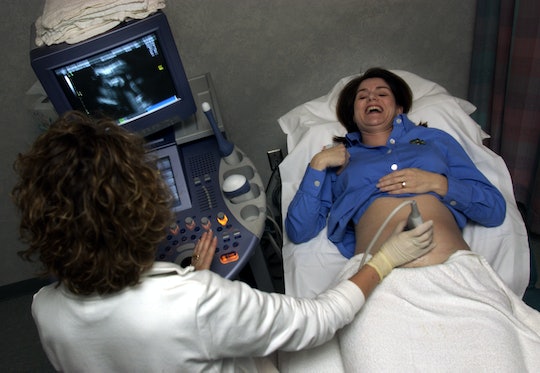 When Do Babies Grow Hair In The Womb? Because Newborns Can Be Pretty Furry

As I cradled my son in the hours after he was born, taken aback by the newness of his particular magic, I vividly recall brushing a finger over the shell of his ear, and the curve of his shoulder, surprised by the fuzz covering his newborn skin. Until he was born, my access to newborns was somewhat limited, and I was unaware of just how hairy they can be. It made me wonder how and when he developed such a coat of fur on his tiny body. Indeed, "when do babies grow hair in the womb?" was one of those questions I had never thought to ponder before becoming a parent.

Babies develop in a very short period of time. Think about it: In under 10 months, a baby is formed from nothing more than a cluster of cells sparked by the electricity of humanity into a fully-formed creature capable of living apart from its mother and host. The hair is only one of the vast, complex structures built in a rapid-fire pace across a span of weeks. So at which point in this period of intense development does hair come into play? The Mayo Clinic wrote that the pattern of hair growth begins around week 14, just after the transition to the second trimester. However, that hair does not become visible until week 22.

Not all babies are born as fuzzy as mine. In fact, lanugo — the first downy soft hair that covers the body of the developing fetus — often sheds entirely before the baby is born, according to the Annals of Anatomy. However, some babies don't lose that cover, and they're born much like mine... wearing a fur shirt. I spoke with several of my friends about how much hair their baby was born with, and some of them had children much like mine, but many — especially my paler friends — had babies born as hairless as those freaky sphinx cats.

My mother tells me that I was born as a slippery little devil without a hair to be had on my newborn body. Truth be told, I would be lacking any real follicular activity until well beyond my third birthday when it finally started to grow in. It wasn't until I'd nearly reached 4 years old before my mother could pull enough long strands together to make even the weakest of ponytails. She relied heavily on hideous skirts and dresses to let the world know that I was, in fact, a female child. I assume many mistook me for a boy in spite of her best, girliest efforts. I was a rather active child, prone to the mess-making usually attributed to boys in the 1980s, and my mother was hard-pressed to keep any clothing on me, let alone skirts.

Lanugo aside, what about the babies you see who seem to be born with magnificent manes of glory? The Cleveland Clinic noted that while hair begins to grow early in the second trimester, this happens unevenly, meaning not all babies are going to be born with great hair (or even any hair).

Both of my children were born with what looked to be receding hairlines. The hair up top was sparse, but they had a ton on the sides and back. My husband was born looking like he was wearing a wig. It was pretty cute. Meanwhile, everyone in my family is born looking like tiny old white men after they take off their hair piece. And we're not really sure why. As pediatrician Bud Zukow told World of Moms, “It’s a genetic thing, or even an ethnic thing. Just like any other characteristic, some babies have more hair than others.” Bald or baby wig, it doesn't matter; they're all pretty adorable, and incredibly remarkable.