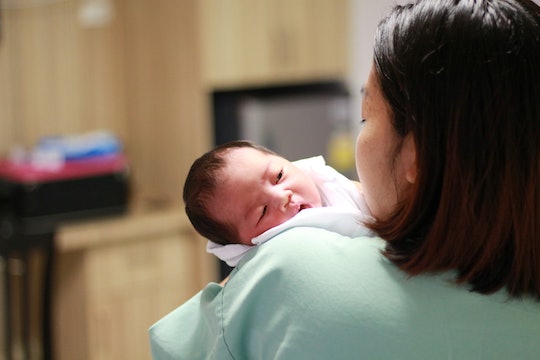 Here's When A Baby Recognizes Their Mom, According To Experts

The best part of giving birth is the moment you finally see or hold your baby, and recognize the face you've previously only ever seen via ultrasound. But when does a baby recognize its mom? And how exactly does that moment of recognition come to fruition? While us parents were able to get "sneak peeks" of our babies in the womb, it's not like fetuses are handed weekly update pictures of their gestating parent.

“Babies recognize their mom by smell and sound quite quickly after birth,” Dr. Natasha Burgert, a pediatrician based in Kansas City, tells Romper.

In fact, smells (or rather, pheromone-like chemicals) play a major role in babies’ recognition of its own mother, according to a study in Communicative and Integrative Biology. Researchers analyzed sweat patch samples from the underarm and nipple areas of subjects during pregnancy and after childbirth to see if these scents helped aid in recognition. The study states that the breast area’s odors have a pheromone-like effect, which causes a response in the newborn to try and locate the nipple for feeding.

Additionally, it seems that babies are attracted to the odor of amniotic fluid, which has an individualized odor that researchers believe may aid in the interaction between parent and newborn.

But even before birth a fetus can recognize the sound of its mother’s voice, and even learns to prefer it. One study out of Queen’s University in Ontario, Canada studied 60 fetuses and found that fetal heart rates would increase when their mothers were reading a poem. When the fetuses heard a stranger, however, the fetal heart rates decelerated. (While the study didn’t mention at what gestational age these fetuses were, we can assume that it was after 25 weeks, when fetuses begin to respond to voices in the womb.)

Even more interesting is the research out of the University of Dundee in Scotland, where researchers have used 4D ultrasound videos to gauge how fetuses in the third trimester respond to people touching the mother’s stomach during pregnancy. The study found that fetuses generally reached out to touch the uterine wall more often when it was their own mother touching her belly, versus someone else.

So, how about recognizing mom’s face? Newborns can generally already see faces, according to the American Academy of Pediatrics, as well as large shapes and bright colors. And a 2019 study found that specific facial recognition happens within a few days of birth. One small-sample size study published in Science Daily does express one caveat, however: young babies cannot recognize a face (even that of their mothers) in profile. The researchers found that responses to profile faces were generally weak at 3 months of age, but eventually increased at about 5.5 months.

What about other, non-gestational caregivers? Burgert says that mom is usually the first caregiver a baby recognizes, but that shouldn’t discourage partners and other types of parents.

“The more hands-on care mom’s partner will provide, the quicker the attachment becomes," she says. "That’s why having your partner and other caregivers help as much as possible during the first few weeks [is important]."

If you believe your baby is having trouble recognizing you (or other caregivers) after several weeks or months, Burgert suggests parents bring it up with their child's pediatrician at their next routine well visit.

“Development is a global process and getting information about your child’s entire spectrum of development is important in determining if a problem exists,” Burgert says.

Developmental delays can occur in children with autism, Down syndrome, babies with hearing loss, untreated jaundice, and more. Your child’s pediatrician would be the best person to consult if you have any lingering concerns, as they would be familiar with your child's full medical history and have more experience detecting such issues.

More Like This
Can You Mix Breast Milk & Formula? Experts Weigh In
Here’s Your Guide To Paced Bottle Feeding
Experts Explain Whether It’s Safe For Your Baby To Sleep On Your Chest
30 Adorable Baby Halloween Costumes, From Animals To Avocados