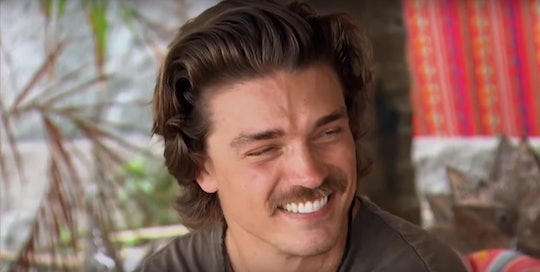 Dean left his mark on Bachelor in Paradise Season 4 as the guy who played Kristina and Danielle and got involved in a messy love triangle that had fans taking sides. This time around, he’s a little older, a little wiser, and hairier thanks to the mustache Dean sports in the season preview. But because fans are eagerly awaiting his return to hopefully redeem himself, they might be trying to figure out when Dean comes on Bachelor in Paradise Season 6.

As with every season of Bachelor in Paradise, the contestants' arrivals are staggered. It usually makes things complicated for established couples who might break up when someone else comes along to woo one of them. Or, it makes it harder for late arrivals to shack up with literally anyone once all of the connections have already been made.

Dean wasn't on the Bachelor in Paradise season premiere, but he is shown prominently throughout the season preview, so fans are expecting a triumphant return to the show which slightly muddled his Bachelor Nation reputation. And although it’s unclear which week he will show up, it might not be until week two or three.

On Instagram, Dean, who rarely misses a day or two without posting a new photo, went from June 7 to June 16 without posting anything new. Caelynn, on the other hand, who is just as active on social media and also seen getting close to Dean in the preview, was inactive from June 1 to July 1 and she showed up in week one. If this is any indication as to when Dean comes on Bachelor in Paradise, then it might be another week or two until he shows up.

There is the question, however, of whether or not fans even want to see Dean after he flip-flopped between Danielle and Kristina in Season 4 and effectively ruined his chances with both of them. It all happened because Kristina and Dean got close before everyone had made it to Paradise. They even continued their relationship when they went home during the two weeks when production shut down.

Back in Mexico, they continued their relationship. Then, when Danielle arrived and expressed an interest in Dean, he felt the same way and wanted to pursue things with her. On Bachelor in Paradise, everyone has a right to explore their options and that’s the whole point of the show. But Dean was unsure about his feelings for both women and seemed to go back and forth, which only made things worse for all three of them.

Afterward, Dean ended up single despite dating two women on Bachelor in Paradise and he did show remorse about the situation when he spoke with Us Weekly following the season.

"I do feel horrible about, you know, watching it back and seeing the way that they were both treated," Dean admitted. "But I feel really, really bad about how Danielle has been treated and how she’s receiving so much negativity on her social media outlets. It’s so unfair to her. So for, like, those reasons, the reasons of other people receiving negativity because of me, I regret that."

Dean didn't return for Bachelor in Paradise Season 5 and this season, Blake is already gaining a reputation for resident womanizer, so it's safe to say Dean might be the more mature one now. The season trailer shows him expressing a genuine interest in just one woman, Caelynn, and he does have that mustache, after all, which obviously makes him infinitely more grown up. Hopefully Dean really has learned from his mistakes and he’s here to fall in love with one woman this time.