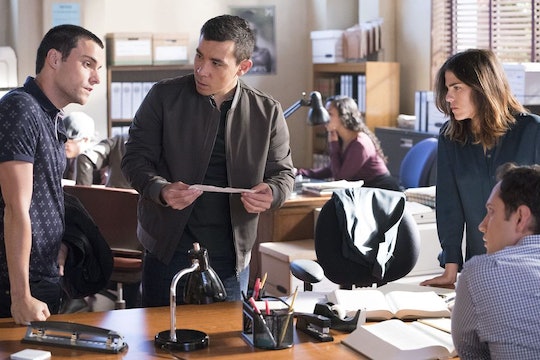 It's Time To Say Goodbye To 'HTGAWM' — For Now

Given the history of the How to Get Away with Murder airdate timeline, it’s no big surprise that the winter finale is already here and that fans are going to have to wait a while before it comes back. But since the winter finale is no doubt going to leave viewers with a startling cliffhanger, when does HTGAWM return from its winter hiatus? Season 4 is already a rollercoaster ride of emotions and waiting several weeks to see the return of the drama and mystery is going to be hard, to say the least.

Luckily, there’s an official return date, as ABC announced that HTGAWM will return on January 18, almost two months to the day from the winter finale. I know, that’s a lot to stomach, but because of the scattered holidays throughout November, December, and January, it definitely makes sense that the HTGAWM winter hiatus would span so long, if only to give viewers a chance to catch their breath and enjoy the holidays.

The unfortunate thing about this particular show, though, is the fact that as a whole, it’s nowhere near as long as most other network TV shows. So when HTGAWM returns in January, there will be a total of seven episodes remaining, since Season 4 is set to have 15 episodes, much like previous seasons. In that respect, it’s no big shocker, but it still makes you look at the winter finale a little differently.

Since the season will legitimately be halfway over, the mystery about the location of Laurel’s baby and who’s dead will likely be revealed. But that still leaves time left over for a whole new mystery to begin to set things up for the second part of Season 4.

Again, this isn’t very different from past seasons of HTGAWM, but it also makes you appreciate the winter finale that much more. Instead of just wrapping things up, there will probably be the usual new flash forward or sudden crime that the Keating Four and Annalise have to deal with, come January.

Even though Season 4’s format has been relatively similar to that of previous seasons, in that there is a big mystery that slowly unfolds through flashbacks and little clues along the way, it’s still been a little unique. Instead of a murder being the prime event to kick things off at the beginning of Season 4, there was a hospitalized Laurel calling out for her baby and a bloody crime scene near Annalise’s hotel suite. After losing Wes last season, it was probably the best way to start things off for Season 4, without a murder at the forefront, and when it returns from its winter hiatus, I expect another similarly unique mystery or crime to play out.

All three of Shonda Rhimes’ TGIT shows on ABC — HTGAWM, Grey’s Anatomy, and Scandal — will be going on winter hiatus at the same time after Thursday night’s batch of winter finales and will appropriately return on the same date on January 18. All three series promise intense and jaw-dropping episodes to end the first parts of their respective seasons, and HTGAWM seems like it will be delivering nothing less.

In the meantime, though, we can all hope that another member of the Keating Four won’t be the victim this time around who meets a deadly demise. (Still not over Wes' death, to be honest.) This group has already been through so much, I'd hate to see them lose another member. Plus, I really don't think my heart could take another emotional hit like that again.