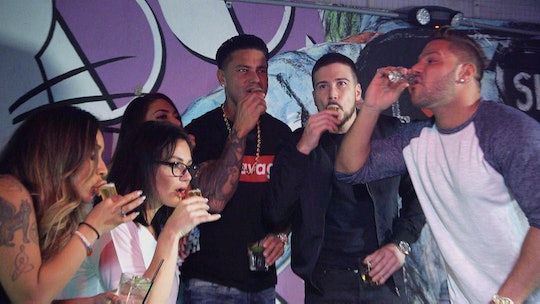 'Jersey Shore Family Vacation' Has Been Renewed For Season 3

I don’t know if Jersey Shore Family Vacation was ever meant to extend beyond the first season, but it’s been pleasantly surprising to see the hard partying 20-somethings of Jersey Shore grow up to be hard partying adults capable of just as much drama. Now that Season 2 is coming to a dramatic close, as if there could be any other way, when does Jersey Shore Family Vacation Season 3 start? To announce the third season renewal, MTV posted an hour long yule log video live on the show’s Facebook page, followed by a typed up letter meant to mimic the infamous Jersey Shore Season 2 letter from Snooki and JWoww.

The letter in the video ended with "When you left crying at the finale, we were busy filming Season 3. Multiple people in the house know, therefore you should know the truth." If that’s the case, then viewers should expect Jersey Shore Family Vacation Season 3 to premiere in summer 2019. The past two seasons premiered in April and then August, respectively, so a summer 2019 premiere date makes sense, especially if the season has already been filmed for the most part. The Season 2 viewership stayed steadily above the one million mark, so it's no surprise that MTV is bringing back the original cast for another season of what’s *shore* to be amazing.

There’s been drama left and right both on and off the show. In a sneak peek from Thursday’s Season 2 finale, Ronnie gets a call from his on again/off again girlfriend and baby mama, Jen, about their Las Vegas home being broken into. Ronnie’s roommates then point out the constant drama their relationship creates. "This whole situation with Jen is crazy," Mike says in the video. "There is a calamity or crisis once a week, like clockwork."

Whether or not the break-in was legitimate or there’s more to it, it shows how dramatic and all around wild the season was. If it’s any indication of what’s to come, then Season 3 should be just as bananas.

Snooki told Entertainment Tonight that away from the show, the cast continues to lead their grown-up lives with their respective families, but when it’s time to film together, they let their wild sides out. "We have families, we're more mature, but when we get together, we’re degenerates," she admitted.

There’s certainly enough going on right now in each of the cast members’ personal lives to make for an exciting dozen or more episodes next summer. Mike, who was sentenced to eight months in prison and two years of supervised probation for charges of tax evasion, is set to begin his jail sentence in January, JWoww and husband Roger have talked openly on social media about a potential split, and Snooki recently announced her pregnancy. Deena will also have given birth by the time summer 2019 is here and like Mike said, there’s never a shortage of Ronnie and Jen drama. They make Ronnie and Sam’s relationship on the original Jersey Shore look tame and that’s really saying something.

If Jersey Shore Family Vacation was originally meant to be a one-off season to show fans a "where are they now?" kind of update, it definitely snowballed into something that could likely last a few more seasons. The cast is grown up and some have the kind of drama that’s more serious than the hangovers at the T-shirt shop of the original show, but they’re still the same unapologetic and dramatic bunch fans love.

I don't know if Season 3 will be the last or if the ratings are an indication of a long life on MTV. Either way, there’s already been plenty of real life material to make Season 3 amazing.