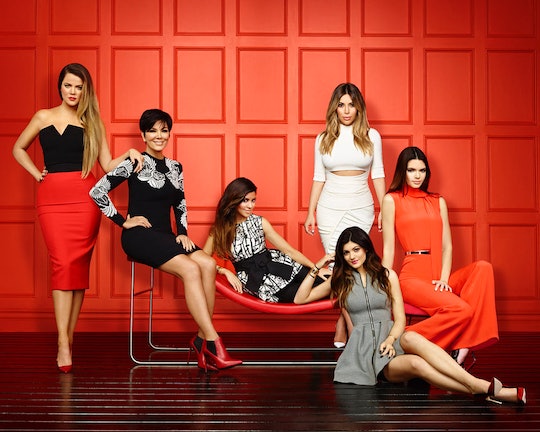 Despite all of the family drama and scandals over the past 10 years, no season of Keeping Up With The Kardashians has been so tense, if only because everyone is waiting to see if the family will confirm all the pregnancy rumors before the season's out. So now that the midseason finale is about to debut, when does Keeping Up With The Kardashians return, so we can get the rest of Season 14? Luckily, fans won't have to wait long.

The show comes back only a few weeks later on Sunday, Jan. 7 and the episode is called "Unexpected News," so there could be more information revealed about Khloé and Kylie's alleged pregnancies. In a promo released before the midseason finale, there are shots of Kim running away from a spider, because some things never change, Kris asking Kylie if they need to arrest someone, Kendall still managing her anxiety, the sisters talking about Rob's relationship with Blac Chyna, and Khloé sharing some news at a party, which many fans believe is when she reveals her reported pregnancy.

All of this is good stuff, but if there's one thing we know about KUTWK promos, it's that sometimes they tease clips that are still episodes away from actually debuting — so if you don't see all the scenes you expected during the midseason finale, you only have to wait another two weeks to get all the details.

If you've been tracking the Keeping Up With The Kontinuity Errors blog like a good doll, you might be a little confused. Aside from the Christmas special, which was filmed in October, the most recent two episodes are comprised mainly of scenes filmed in May, July, and August. If the rumors are really true about Kylie and Khloé's pregnancies, then they found out sometime in June or July, most likely, and the family likely filmed any reveals in August or September (we know that they filmed through the fall, at least).

So when the show returns in January, it might be the first time we get to see and hear more from Khloé and Kylie about what's going on with the pregnancy rumors. Theoretically, the entire second half of Season 14 could just be Khloé, Kylie, and Kim going baby shopping and scheduling their glam squads for the birthing rooms. If the rumors are true, the sisters will all be welcoming new kids into their family right around the same time that the season ends.

In which case, Kris Jenner is an absolute genius, since pairing up the actual events and the narrative of the show is no easy task, but very smart for keeping even non-Kardashian fans interested. Although KUTWK eventually, always deals with their major tabloid events on the show, it usually comes after the fact.

So even though fans are hoping for all the pregnancy reveals on the show way before all the sisters have their babies, it's possible, especially if time moves as slow as it has been on the show this season, that they wont handle all the fall out from the pregnancy rumors that came out in late September until the very end of the season.

Pregnancy rumors aside, the Kardashian sisters, who also have producers' credits on their series, know what they're doing when it comes to making a great show and keeping everyone interested in their lives. So if you didn't get your fix during the midseason finale, you only have to wait two Sunday nights for it to come back.