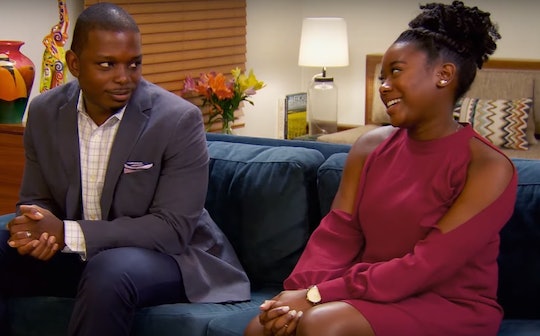 Every season on Married at First sight, a group of new cast members take their nervous walks down the aisle and embark on an eight-week experiment while married to a complete stranger. Sometimes it works out and sometimes, it ends in divorce. But regardless of the outcome, fans eat it up every time. Now that Season 9 is coming to a close, it's only natural to wonder when Season 10 of Married at First Sight premieres.

According to a promo which aired on Lifetime during the Season 9 finale, Married at First Sight Season 10 premieres on Jan. 1. The new season will also feature five couples instead of the typical three or four and the episodes will be super-sized at two hours each. This means more drama, more romance, and more awkward first kisses at the altar. It’s basically what fans live for and it could be one of the best seasons in recent years, if only because of all of the extra content which is sure to be stuffed into the longer episodes.

It’s not clear yet if the season itself will be longer or shorter with the planned two-hour episodes. Just like past seasons, however, fans can expect the next season of Married at First Sight to arrive right on schedule.

The Facebook page for Married at First Sight casting recently posted about casting for Washington, D.C. and New Orleans locations, so there’s a good chance that Season 10 will take place in one of those cities and feature a new group of local hopefuls ready to marry strangers. Only this time, viewers will get to see more of them.

This isn't the first time Married at First Sight altered its format. Up until Season 8, the show featured just three couples per season. Then, it switched to four couples, and now, for Season 10 at least, there will be one more couple to round out an otherwise full season. Having another couple in the mix might also give a little hope to those watching at home and wishing more of the couples make it past decision day.

In Seasons 8 and 9, only half of the couples were still together by the end of each season. Those odds aren't great. If having five couples means there is potentially more true love to go around come Season 10, then it’s good for all around morale.

For what it’s worth, the Married at First Sight success stories do make it seem like the show’s process legitimately works for some of the participants. Some former cast members recently spoke to People about life after Married at First Sight and revealed that once the cameras stopped rolling, they continued learning about their new spouses and falling in love without the added pressure of meetings with the show’s experts and being filmed.

"What I’ve learned about Kristine is her willingness to do whatever it takes to win," Keith Dewar, who appeared in Season 8, told the magazine. "Being able to share the triumphs and failures of life with someone who accepts you as you are is one of the greatest gifts to come from marriage. My spouse encourages me to be my best and consoles me when I fall short."

Even if the experiment doesn't work for some couples, it still works out for others. It’s all about the individuals and how compatible they end up being with their partners. And hopefully when Married at First Sight Season 10 premieres in January, there will be more success stories.