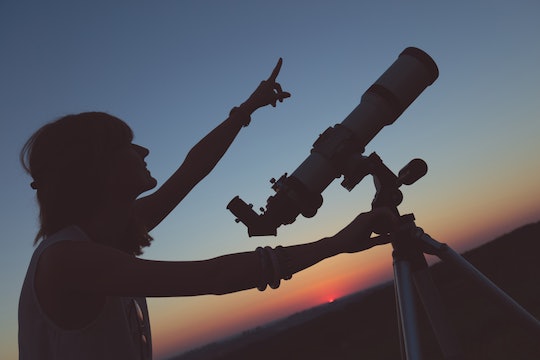 You’ve got a flat tire and are running late to work on the same day that your computer crashes, and your kid wouldn’t go to bed last night and they keep throwing tantrums and suddenly they have a cold and then your entire family is sick? Whew. If that run-on sentence feels like your last 24 hours, you may be wondering when Mercury retrograde starts, because a lot of people feel like their lives begin to spiral when this phenomenon happens. What is Mercury retrograde and why do people blame bouts of bad luck and weird feelings on this astrological event? And more importantly for you — since you feel like you’re having a hard time — is it happening soon? Is that why your life seems like it’s in turmoil?

Mercury retrograde starts up again on November 17, and we’ve experienced it already this year from March 23 through April 15 and July 26 through August 19, and this next bout will last through December 6. And then that’s finally it for the year. Almanac.com says when Mercury is in retrograde, it appears to be going backward, and we are influenced by this change in orbit because of the way it interacts with our gravitational pull. As a Mental Floss article explained, there’s an “idea that the gravitational pull from Mercury influences the water in our bodies the same way the moon controls the tides,” however, “... this apparent reversal in Mercury's orbit is actually just an illusion to the people viewing it from Earth.” So if it’s not really something that affects us, why have people studied it and cared about it for so long?

“Mercury retrograde" was being written about back in the mid-18th century in British agricultural almanacs, according to Mental Floss. Farmers used to base their planting schedules on star patterns, believe it or not. During the Victorian era, when astrology was all the rage, "late 19th-century publications like The Astrologer’s Magazine and The Science of the Stars connected Mercury retrograde with heavy rainfall. Characterizations of the happening as an 'ill omen' also appeared in a handful of articles during that period, but its association with outright disaster wasn’t as prevalent then as it is today.” The article also noted that this "superstition" is based on what astronomer Dr. Mark Hammergren called a “confirmation bias,” which Psychology Today defines as something that occurs from the direct influence of desire on beliefs. That's like when you believe something to be true because you want it to be true (in case you needed a quick definition like I did). In other words, folks don’t perceive information and circumstances subjectively (“wishful thinking,” so to speak).

Astrologically-speaking, Mercury retrograde is associated with miscommunication, arguments, bad moods, and obstacles of all sorts. The power of this planet's seeming travels in the wrong direction has been known to influence everything from the temperament of your cat to your milk supply, and if you're a believer, it actually seems to make sense.

But even if you're not fully convinced, your expectations might be a little skewed due to the collective retrograde buzz in the air. So if you think everything is set to go awry on November 17 because of Mercury in retrograde, you’re definitely not alone. Just don’t psych yourself out needlessly; that only makes things seem worse than they are, and you'll set yourself up to have a bad day (or week, or month). Think positive thoughts and take a deep breath. Things will get better. Retrogrades don't last forever!