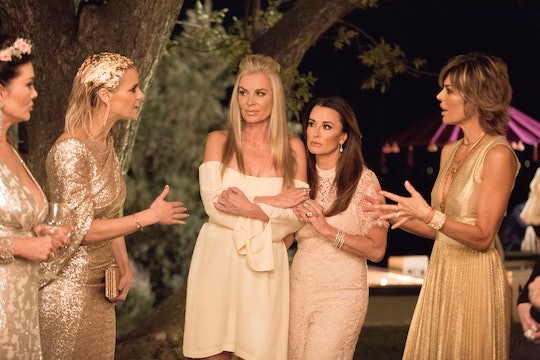 When it comes to The Real Housewives of Beverly Hills, any fan will tell you that the drama never really ends. In fact, even when the cameras have stopped there are still issues among the women that never quite get resolved. That being said, since Season 7 is finishing up, fans will obviously find themselves asking when RHOBH returns for Season 8, because what are we watching these shows for if not for the hefty doses of drama?

Although the series has yet to officially be renewed (and therefore doesn't have a current release date for Season 8), in the past, the season premieres have been mostly in the months of November or December. The good news, though, is that the two-part RHOBH reunion special will be much sooner, giving fans the chance to catch up with the women and see them again before the long and torturous wait for Season 8 begins.

The RHOBH Season 7 reunion will air on April 11, which is the week following the finale, and the second part will air exactly one week later on April 18. Kyle Richards told Us Weekly that the reunion, which filed on March 10, was full of the drama and tension that Season 7 was full of the entire time. "There was screaming, there was crying, there was a walk-off. It was so intense at times," Kyle told the magazine. Are you excited yet?

Even if there isn’t an official pick-up for Season 8 of RHOBH, we can all take comfort in knowing that both parts of the reunion for Season 7 are going to be enough to tide fans over with for a while. The season was full of fights and drama from so many of the women that it was often a show divided. Even when they took the final big trip to Hong Kong, they couldn't find a way to squash their beef with each other and Lisa Rinna and Dorit Kemsley were still far from being friends, like at all.

Although fans are still impatiently waiting for any news about Season 8, Eden Sassoon told WetPaint that she’s up for the prospect of returning to the show. And Dorit told TooFab that while she has yet to be asked back, it’s something she’d have to discuss with her husband first. But with all of the drama that she brought for her first season with the ladies, I’m sure viewers can expect another round of Dorit for Season 8.

The season began in a pretty awkward place with Pantygate 2016 and ended with the women spreading drug rumors about each other and no one fessing up to anything. Obviously the RHOBH Season 7 reunion is going to be magical in that respect and until Season 8 is officially announced (though can any of us see this ending now?), it will have to be enough to tide us over.