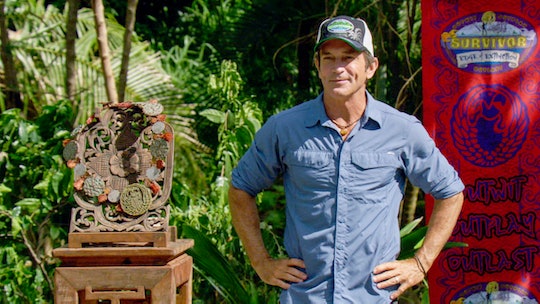 'Survivor' Season 40 Marks A Milestone For The Series

It has been almost 20 years since Survivor fans met the first group of castaways who would battle it out on a remote Malaysian island for the chance to win $1 million. The format of the show hasn't changed much since then, but when Survivor Season 40 premieres, almost 20 years to the date of the show's initial premiere, there could be some game-changing twists. Right now, there hasn't been an official announcement about the premiere date, but judging by past seasons, Season 40 should premiere in February 2020.

According to Inside Survivor, Season 40 will feature some notable additions to the monumental season, including the return of the Edge of Extinction twist. Season 38 introduced the desolate island which some players had the option of going to instead of home in the event they were voted off the main island. The players who ended up going to the Edge eventually battled it out to see who would return to the game and who would head to jury.

Survivor Season 40 is also rumored to be increasing the long-standing $1 million prize to $2 million. CBS game shows that have been with the network for years aren't known changing the prize money and Big Brother, for example, still hands out $500,000 as the grand prize at the end of the season despite other game shows giving out more impressive monetary prizes these days. But Survivor Season 40 is a big deal and it looks like the goal is to play into how monumental this milestone is.

Inside Survivor also revealed the Season 40 cast, which is rumored to consist of 20 returning winners from past seasons. This is essentially a season of the best of the best. If the stakes were high and the competition was fierce before, everything just got a lot more intense for these Season 40 competitors.

Survivor Season 40 could also introduce a new kind of Survivor currency into the mix, as if the season isn't already gearing up to keep contestants and fans on their toes. The players stuck on the Edge can send advantages to other players who are still active in the game. Those players have to pay for these advantages with the currency which can then be used by cast-offs on the Edge for basic necessities. It's not unlike currency featured on the show in the past, but it could continue to shake things up on a season that already sounds like it could be more fast-paced than ever.

In 2018, long time Survivor host and producer Jeff Probst told Us Weekly that there would never be an all winners season of Survivor. He argued that there just aren't enough former champions who would want to play the game and put themselves through it again.

He did admit that fans and CBS executives alike have been pushing for it, which likely led them to this all winners season at the beginning of 2020. Doubling the prize money could have also been an incentive to get some of the more reluctant former winners to jump on the bandwagon for another chance at living on a desolate beach and going without proper hygiene for weeks.

When Survivor Season 40 premieres next year, it could potentially be a who's who of former players who have already made their mark on the show. Only this time, one will walk away with epic bragging rights and a prize other winning contestants have never seen from the show before.

Survivor airs on Wednesdays at 8 p.m. ET on CBS.