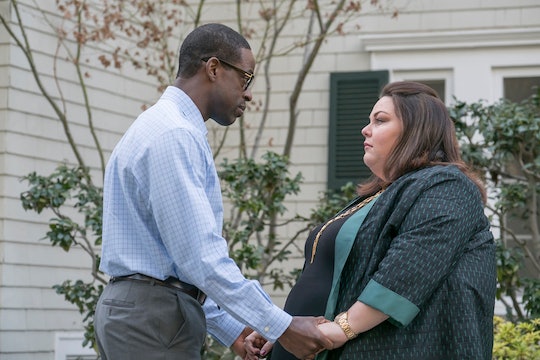 Fans Are Anxious For 'This Is Us' Season 2

Usually you find out about a show's renewal after the season has ended or close to the end of the season. Even then, though, it’s typically just for one season. For This Is Us, however, the show has gotten a two-season renewal long before Season 1 ended, which no doubt leaves fans wondering when Season 2 of This Is Us premieres. Honestly, the important thing is that the series is returning at all, but since it's a network TV show and Season 1 premiered in the fall of 2016, then chances are, the Season 2 premiere of This Is Us will follow suit and debut in the fall of 2017.

Season 1 ran for a total of 18 episodes, which is pretty close to the usual 20-something of a network TV show. When it was renewed for a second season, it was also revealed that Season 2 will span another 18 episodes, meaning that a Fall 2017 premiere date is totally reasonable.

The first season alone enabled the series to receive three Golden Globe nominations, including one in the category of Best Drama which, according to Variety, hasn't happened for the network in 10 years. But really, are any of us that surprised? The fact that This Is Us has been renewed for a second and third season just shows how in demand the tear-jerking drama already is, thanks in large part to the great writing and acting that goes into each and every episode. So naturally, the network likely wouldn’t make fans wait longer than the fall months for a Season 2 premiere.

This Is Us creator Dan Fogelman spoke to Entertainment Weekly about the recent episode which showed William’s death and what it means for Ron Cephas Jones, who plays William on the series. Fogelman said that William will still be shown in some capacity as the show moves forward with Season 2, but how that will play out remains to be seen, given that he doesn’t have an expansive past with the Pearson family like Jack did.

Additionally, the cast of the show recently spoke to Variety about where they see want to see some of the characters next (Mandy Moore wants to learn more about Rebecca and Miguel and Chris Sullivan is all about Randall), so there’s definitely already some hype for Season 2. The premiere date, though, has yet to be officially announced. Luckily, NBC is pretty consistent and since Season 2 is slated to last the same amount of episodes, Season 2 of This Is Us will likely premiere once fall rolls around. Until then, all we can do is wait.