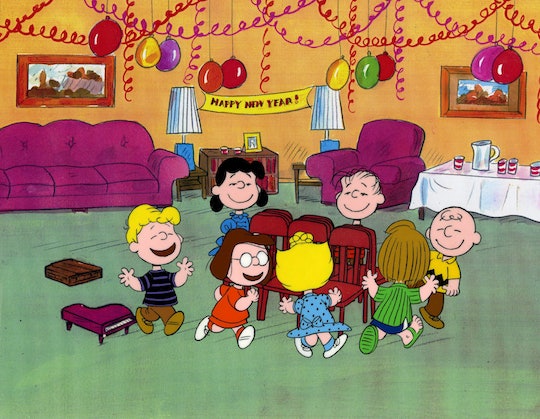 'Happy New Year, Charlie Brown' Is Coming To TV Sooner Than You Think

If there’s a holiday you take time to celebrate, then chances are, there’s a Charlie Brown special for it. I’m not knocking the ability of Charlie and his happy band of overly precocious kids to celebrate holidays throughout the year in style, but during and after the Christmas holiday season especially, there’s an influx of specials. And now that New Year’s Eve is fast approaching, you’re definitely going to be wondering when Happy New Year, Charlie Brown will be on TV. While New Year’s Eve is mostly about celebrating with other adults in style and sparkly attire, there’s no reason why kids can't have a little fun too. Even if that still means lights out at 8 p.m., because, um, adulting and whatnot. Hulu will premiere the special on Jan. 1, but before that, you’ll be able to watch it a couple of other ways, including on network TV.

Before it leaves Amazon Prime, on Jan. 1, you can watch it there and it will air on ABC on Dec. 27 at 8 p.m. ET. for you and your little ones to watch live or DVR for actual New Year’s Eve. In Happy New Year, Charlie Brown, the ever too mature for his age but not for his hairline Charlie Brown decides to spend the party holiday reading instead of joining in with the other kids. He does invite his forever crush, the Little Red-Haired Girl, to Marcie and Peppermint Patty’s New Year’s Eve party to ring in 1986, but when she doesn't respond to his invite, he brings his trusty book instead. As usual, you can anticipate lots of the dancing that Peanuts gang is known for on the special that’s older than so many of its viewers but is still somehow timeless.

Although the Little Red-Haired Girl doesn't immediately respond to Charlie’s invite, he later finds out that she was inside dancing the night away with the rest of the party goers anyway. As most Charlie Brown fans know, the mysterious Little Red-Haired Girl was his longtime crush in a lot of the different TV specials and she wasn't finally shown until the 2015 Peanuts movie. At the time, Director Steve Martino told Vanity Fair that she’s always been used as a way to see another, deeper side of our beloved Chuck.

"What is fascinating in the way [Peanuts creator Charles] Schulz uses the Little Red-Haired Girl is that she’s a window into a different kind of emotion with Charlie Brown," he explained. "You can feel his heart race at a little bit of a faster pace, the feeling that, this time, I’m going to do it. Those strips offered a little different flavor." He said that although Shulz purposely left the Little Red-Haired Girl’s identity and appearance up to the comic strip and TV special viewers’ imagination, it was important to finally bring her to life.

Unfortunately, she’ll still be in silhouette form in Happy New Year, Charlie Brown, but it’s another classic situation that Charlie finds himself in due to his own mishaps.