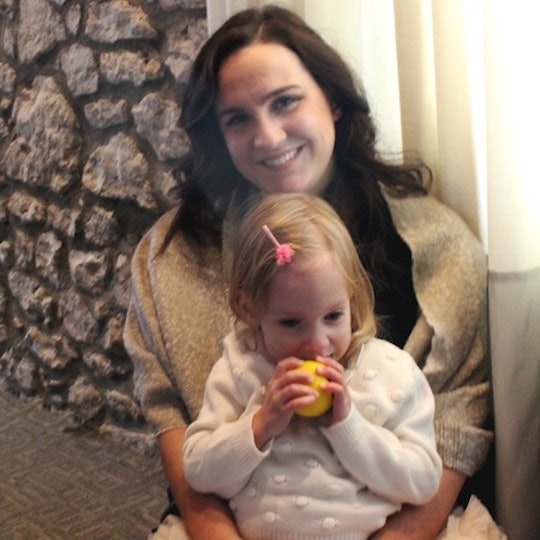 When I Was In Crisis, It Was Other Moms Who Saved Me

I’m a big advocate for mental illness stigma fighting, and one of the things that advocates for mental illness stigma fighting like to say is that you shouldn’t be afraid to reach out and ask for help. I really do believe this: I volunteer on a crisis line now after struggling for years with anxiety and depression, and I see on a regular basis how hesitant people are to open up about their struggles. I also know how many people aren’t even aware of what’s available, or the ways a service like ours could help them (like the fact that you definitely do not have to be suicidal to call. You can call just because you’ve had a hard day and would like to talk about it!).

We know that many people suffer in silence because they’re afraid, or because they don’t know how to ask for help. But people suffer in silence for another reason, too, and it’s something that doesn’t get discussed very often. Even though I am a huge believer in crisis lines and therapy and community programs and psychiatrists and medication and basically anything that exists that can help people who are struggling (and even though I readily recommend those things to others), the truth is even if you really want to get help and you try really hard to find it, it might actually not turn out to be very helpful at all.

It took me a while to realize this, because I actually got very lucky when I was the one who needed help. The first therapist I’d ever tried turned out to be amazing — so supportive and lovely and experienced and totally affordable — and so naturally, I became a huge believer in therapy. I’ve always responded pretty well to antidepressants, and they’ve always worked pretty quickly for me, so I became an even bigger believer in medication, too. And then, a few years back when things got really bad, and I found myself contemplating suicide, I ended up in the ER and was admitted to the psych ward, where I stayed for a week and where I was safe and taken care of and I finally began to feel better. All of those things saved my life, and they’ve made me outspoken about the importance of quality mental health care options. But since then, I’ve learned that my overwhelmingly positive first experience with the mental health system isn’t always the norm (to say the least).

The first time I ever saw a psychiatrist, I was shocked at how cold and judgmental he was. It felt like he made a bunch of assumptions about who I was and what my issues were, and I was so grateful that I’d spent enough time with a wonderful therapist by that point to realize that those assumptions were totally off the mark. The second time I tried seeing a psychiatrist, I left in tears, convinced that I was way, way, way more screwed up than I ever thought, and I never went back because I was afraid of what else she'd have to say about me.

I’ve been to three psychologists since my original, fantastic therapist closed her practice two years ago, and have yet to find anyone I haven’t felt totally uncomfortable with or ignored by — and they’ve all charged about three times as much as she did. I’ve heard countless stories like mine on the crisis line too, from callers whose doctors or therapists aren’t a good match, or from callers who have been turned away by ER triage or other crisis services for one reason or another when they felt like they really needed immediate help.

A couple months back, my toddler son walked out the front door of our home when both my husband and I were home and preoccupied with other things, and neither of us even realized it. He was OK, thank goodness, but I was horrified, totally distraught, and couldn’t stop crying at the thought that he could have been hit by a car or taken by someone. He could have died and we wouldn’t have even known that he was missing. I was so overwhelmed after bringing him back home (he’d walked two doors over to our neighbor’s house) that all I could do was crawl into bed and try not to think about what a terrible mother I was.

She didn't really listen, and had glossed over my very-real fears like they were silly.

My husband was trying to be comforting, reminding me that our son was fine, that mistakes happen, but that wasn’t at all what I needed to hear at that moment. I thought about my own experience on the other end of the crisis line, and realized that talking to a stranger who was just going to listen to me without judgment was probably what I really needed. So I Googled the number to a different crisis line (I thought it might be weird to call the one I also volunteered at), and gave it a call.

According to the website, this service offered callers free, anonymous support from professional counselors. I figured that sounded good, especially considering none of the people I volunteer with are professional counselors, and yet, they’re all so great on the phone. A woman answered, and I explained what had happened that day with my son. I also told her a little bit about how I’d become so much more paranoid about losing him after he’d spent four months in the NICU after being born 15 weeks early, and how much anxiety it was still causing me.

The counselor on the other line told me:

Well, the way I see it, there comes a point at which you just kind of have to move on.

“Oh, um, well, I mean, it’s been really upsetting for me,” I said, hoping that maybe she just didn’t understand what I was trying to say. She said:

Yes, but at the same time, your son is doing great! You found him at the neighbor’s house and nothing happened, he’s safe. And just think at all the things he’s already overcome in his life. Obviously he’s here for a reason. He’s going to be fine.

For a moment, I wasn’t sure what to say. Did this supposedly-professional counselor just try to tell me that I shouldn’t be upset because nothing bad happened? And that I’m supposed to feel comforted by the fact that she thinks he’s “here for a reason”? What about all the other babies in the NICU who died? Were they not here for a reason? And how could she possibly know that he’s going to be fine?

After I felt like the resource I totally believed in had let me down, I tried something else.

I cut her off mid-sentence and made up some excuse for why I had to go. After I hung up, I felt hurt, but also angry because I realized how many other people this woman has probably spoken to on this crisis line. I knew that, for whatever reason, she really, really screwed up our call. Her call lacked the empathy and understanding I needed. I knew that the sadness I still felt after we hung up wasn’t about me, or the fact that she was "right" and I should just get over it, or that I was overreacting by not understanding that my son was “here for a reason.” It was that she didn't really listen, and had glossed over my very-real fears like they were silly. How many other people have called and talked to this person, or someone else, not understanding that this wasn’t the way it was supposed to be? I imagined them hanging up and thinking, “well I’ll never try that again,” feeling more alone than ever.

The truth is that getting help can be hit and miss sometimes. And that’s not really surprising, because everything can be hit and miss sometimes. But the difference is that we don’t rely on those people to be there for us emotionally when we are feeling the most vulnerable we may have ever felt. And when it takes a huge amount of courage as it is just to pick up the phone, when you have a bad experience with a counselor or therapist or psychiatrist or triage nurse or helpline volunteer, it's really hard to just chalk it up to it being a one-off experience that isn’t representative of the whole picture.

Having my feelings hurt by the crisis counselor was difficult — it made what was already a heartbreaking, guilt-laden situation even worse. But after I felt like the resource I totally believed in had let me down, I tried something else: I posted a message about what had happened in a Facebook group I'm part of for writer moms, and the support I received was immense, and incredibly therapeutic.

I was hesitant to mention it to those women online, because I already felt terrible, and after talking to the crisis counselor, I felt even worse. But I knew from past experiences that I probably wasn't going to get over this one on my own. So I kept trying. Reading their comments was both incredibly reassuring and eye-opening. I wasn't alone, I wasn't a bad mom, and this horror story wasn't something that any of these women felt I should just "get over" or "move on with." None of them reassured me that my son was "here for a reason" or that we'd been "spared" for some larger service. I know there is no single solution that will always work, and feeling better doesn't mean you'll never struggle again. These women gave me something the counselor on the phone didn't: space to voice my fears and their unwavering support.