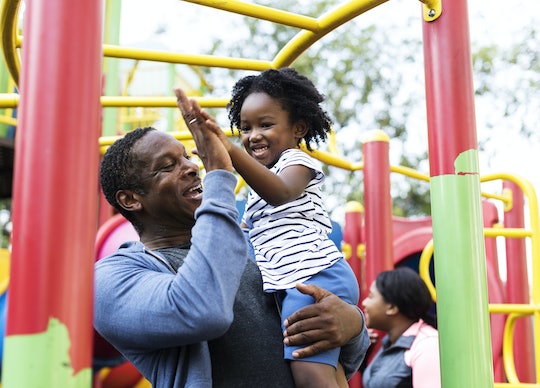 When Is Father's Day? You Can Finally Focus On Dad Now That The Royal Wedding Is Over

The weather is warming up, kids are out of school, and that means one special holiday is fast on its way. It's almost time to celebrate dad and all he means to you. So when is Father's Day 2018? It's one of those holidays that falls on a different day each year, so it's totally OK if you're unsure of the exact date. It's a moving target.

Father's Day this year falls on Sunday, June 17. So depending on when you read this, you either have a decent amount amount of time left to plan the celebrations for your father this year, or not. Basically, best the time to buy gifts or book reservations is early, so start thinking about the way you want to celebrate with your dad asap. Whether you go for a fancy lunch or just hang out for a little while at home, it's the perfect day to spend with your own dad or favorite father figure.

As a reminder, Father's Day falls on the third Sunday in June for people who celebrate the holiday in the United States and the United Kingdom, as noted in Birmingham Live. But in other countries, the dedicated holiday for fathers falls on different days. For instance, in countries such as Portugal and Spain, a holiday for fathers is celebrated on March 19 in observance of a medieval holiday celebrating dads, as further explained by Birmingham Live. Whatever date you celebrate the day, it's nice to know that dads have been specifically honored for hundreds of years and are getting some recognition all over the world.

The more modern Father's Day holiday has some interesting origins of its own. Although it was first celebrated in June of 1910, Father's Day was not a nationwide holiday until 1972, as noted on History. What gives? After all, Mother's Day was made official in 1914.

Well, the people who tried to make Father's Day official were met with some resistance in their early efforts. Part of the skepticism was based in the gift-giving aspect of the holiday, and by that I mean its ability to generate money for businesses. As a florist said in response to the early efforts of making Father's Day a thing, "fathers haven’t the same sentimental appeal that mothers have," according to History. Ouch. But now that it's an official holiday, it looks like that florist has been proven wrong. People absolutely love showering their dads with gifts for this occasion.

In fact, Father's Day spending generates billions in sales every year. Last year's Father's Day total spending was estimated at $15.5 billion by the National Retail Federation (NRF). This was a dramatic increase from the 2006 expenditure of about $9 billion for Father's Day gifts. Dinners out, cards, and clothes were some of the most popular categories for spending, as further noted by the NRF. It looks like dear old dad has been making out like a bandit in recent years.

It's all a part of increased spending on gifts in general for close friends and family. "After seeing consumers splurge on moms and graduates earlier this year, it’s no surprise that dads are going to enjoy a few more gifts on Father’s Day," said Prosper Principal Analyst Pam Goodfellow in the NRF. Honoring fathers, stepfathers, godfathers, husbands, friends, uncles, grandfathers, and even sons is a real treat for people the world over.

So whether you take him out for brunch, hit the golf course, or just drink a couple of beers together in the back yard, take heart in knowing that your dad has earned this day of celebration. Really, dads the world over deserve such recognition. It's beautiful that the act of parenting is being celebrated for moms and dads alike.