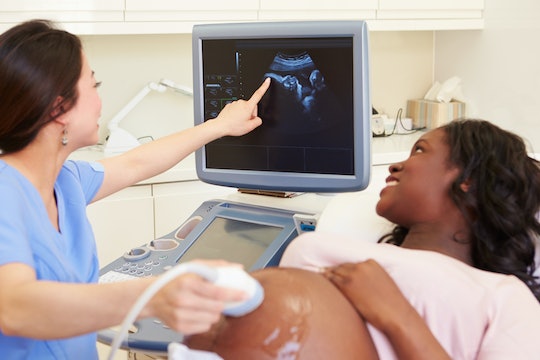 I'm a procrastinator, and I know it. In every aspect of my life, I'm a wait-until-the-last-minute kind of girl, but when I found out I was pregnant with my daughter, I was eager to make my first OB-GYN appointment. Whether it was excitement or worry, I called my doctor immediately, but I was curious — when is it too late to see an OB-GYN if you're pregnant? Is there a cut-off time?

More Like This
Can You Go Down A Water Slide If You're Pregnant?
Your Guide To Swimming Postpartum
9 Things Not To Say To A Pregnant Woman On Mother’s Day
Your Guide To Hiking During Pregnancy

Turns out, it's pretty physician-specific. According to G. Thomas Ruiz, MD and OB-GYN at Orange Coast Memorial Medical Center, the first screening tests are done when you're around 11 weeks pregnant, so most OB-GYNs like to see you around six to eight weeks after your last menstrual period. If you're considered a high-risk pregnancy, your OB-GYN might want to see you even sooner than six weeks, Ruiz tells Romper.

But even if you are healthy and your pregnancy is progressing normally, waiting too long to make an appointment can backfire. Heather Bartos, MD and Fellow of The American Congress of Obstetricians and Gynecologists (FACOG), tells Romper that she has had some patients come to her as late as 20 to 24 weeks pregnant, citing insurance issues or telling her they didn't know they were pregnant. But Bartos notes that not every OB-GYN is willing to see a patient that far along in their pregnancy.

"Many OB-GYNs don't want to take a patient who is late in her pregnancy because she has likely missed many important milestones such as ultrasounds and glucose tests. They don't want the liability of a problem occurring in pregnancy," she says.

According to the American Pregnancy Association, that first visit may be your longest one, but it's also really important. Your OB-GYN will get a brief medical history from you, your blood will be drawn for several different screenings, and you'll get all the information you need about things to avoid while pregnant, prenatal vitamins, fevers and medication, miscarriage risks, and more. It's basically a quick "what to expect" summary in the form of a doctor's visit. Depending on how far along you are, you might get to hear the heartbeat of your baby.

Because prenatal care is so important, it's not unheard of for a doctor to refuse a patient when they are too far along. Some just aren't willing to take the risk, especially since you've had no tests, screenings, or sonograms up until that point. If you're trying to switch providers late in pregnancy, Fit Pregnancy noted that's a totally different ballgame and can most likely be done depending on the practice.

If you're far along in your pregnancy and have yet to see an OB-GYN, it's time to start researching. Call practices and explain the situation. Because it's so physician-specific, you may be able to find one who will work with you or who can offer pregnancy resources for your particular situation.