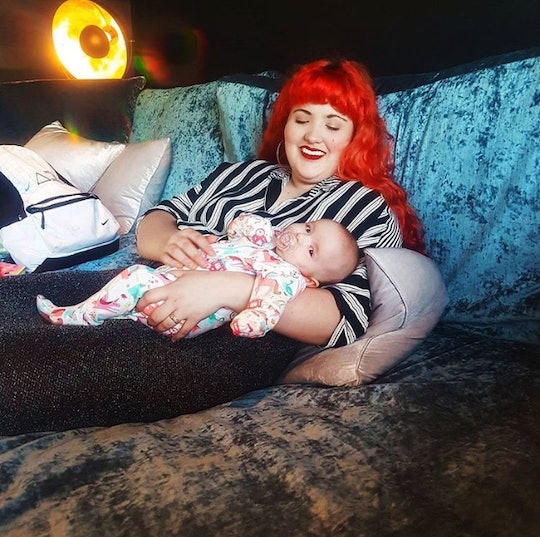 I braced myself to give the speech for the sixth time, feeling furious and petrified in equal measure. "Look, I didn't know I was pregnant. I showed no signs or symptoms. I'd been told I'm infertile for over 10 years thanks to severe Polycystic Ovarian Syndrome (PCOS). I was on birth control. No, I'm not lying."

A receptionist — it didn't matter which one; after a while, they all started to sound the same — on the other end responded: "I'm sorry, but we can't see you. Our OBs don't take new patients this far along. We can't be liable should there be problems with your baby. Honey, you should've been more careful." A myriad thoughts ran through my mind when a sonogram at a free clinic in New York revealed that I was almost 21 weeks pregnant. After the initial freakout — jam-packed with questions like, "Can we afford this?" "Is now the right time?" "Are we selfless enough to care for a whole 'nother human being?" — came more big decisions. Where would my partner and I live? Where did we have the best support network? Could we balance our careers and new parenthood?

A thought that didn't cross my mind, however, was what we might do if we couldn't find a doctor willing to see us in the first place. How would we go about doing five months worth of tests and blood work? Who would tell us about any potential consequences of the lack of prenatal care? How would we make sure our daughter was OK, and that 20 weeks of a secret existence alongside mommy's intake of booze and meds and cannabis and some other stuff hadn't somehow harmed her?

The nurses at the free clinic who determined how far along I was were sure that my OB-GYN would want to see me immediately. They could, unfortunately, provide no further care. But when I tried to call her, a receptionist told me I was "absurd" for not knowing I was knocked up and suggested I visit Planned Parenthood. My doctor couldn't see patients so far along. There were risks she couldn't take; risks no one cared to explain to me.

I then started making the rounds on a list of OBs covered by my insurance policy and within 30 miles of my home. But every one of them vocalized some derivative of that first call: "We can't be liable for any possible problems." Or, upon finding out that my partner and I planned on moving to England to raise the child, "Taking on a new patient for such a limited time isn't worth our resources." With every conversation, I grew more and more familiar with the unofficial script for "How To Turn Down A Scared Woman Who Didn't Know She Was Carrying A Life Inside Her."

More disconcerting still, however, was the continued suggestion that I was in this predicament as the result of my own recklessness. How could I be so absentminded? So unaware of my body? So... stupid?

Eventually, I stopped telling them about our plans to move. And eventually, I thankfully found a doctor at the practice where my step-mother is a patient. With his help, we indeed crammed in 20 weeks worth of tests, growth scans, and genetic counseling into three days. We found out that, thankfully, our baby appeared to be perfectly healthy. She was unharmed by what so many medical professionals before him had called "carelessness" and, in one instance, "self-absorption" on my part.

I still dread to think of what might have happened had we not found a doctor. Should anything have actually been wrong with the baby, there would have been no way of detecting it. There would have been no way to help her. I wouldn't have been able to get a prescription for prenatal vitamins chock-full of extra iron, either, which helped make up for the deficiency of it in my diet throughout those initial 20 weeks. Yep, I imagine I would've had to pop into the hospital when close to full dilation and simply hoped for the best — that the very literal impending arrival of a baby would be enough to finally be taken seriously by someone.

More than dread over "what ifs," however, I still feel immense frustration over what I cannot help but describe as direct opposition to the Hippocratic Oath. If physicians, above all, are sworn to "first do no harm," how is the refusal of patients in need ever justified? It's a question I think of regularly when contemplating the lack of treatment options for patients with no healthcare in the U.S., and it's certainly a question I thought of during that initial rejection period.

Was I actually that self-absorbed, as one receptionist claimed? Was I so self-absorbed that I truly could not see beyond my own immediate wants and desires? And if both of those things were even just a little bit true, how could I ever possibly do right by this baby? Was I doomed from the start? Was she?

More disconcerting still, however, was the continued suggestion that I was in this predicament as the result of my own recklessness. How could I be so absentminded? So unaware of my body? So... stupid? Even if there was no weight gain in my already fat figure, even if not having a period is my normal, even if I never experienced morning sickness or any particularly severe, out-of-the-ordinary exhaustion... how could I not have known, deep down, on a spiritual level, if nothing else, that I was expecting?

It was a suggestion I encountered both subtly and not-so-subtly by all six OBs who rejected me (as well as numerous internet trolls after reading some of my work on the subject). And every time, it made me feel like I was already failing at motherhood. The notion that moms and their babies are cosmically linked to the point where the first sign of an embryo should result in profound recognition was inescapable.

So, why hadn't I recognized my embryo? My fetus? My child? Was I actually that self-absorbed, as one receptionist claimed? Was I so self-absorbed that I truly could not see beyond my own immediate wants and desires? And if both of those things were even just a little bit true, how could I ever possibly do right by this baby? Was I doomed from the start? Was she?

It took several weeks and quite a lot of reassurance from my partner and friends to come to the conclusion that the medical rejection and chastising I was experiencing was not at all my fault. After all, I had been led to believe, for so long and by the same medical community, that I was sterile. Even if there had been signs of pregnancy — be it mild fatigue or that one incident of vomiting after a dinner out — why should I have ever been suspicious? My PCOS and my weight were supposed to mean no babies for me. My entire body was supposed to mean no babies for me.

But even if I had experienced more of those symptoms — even if morning sickness took over my life for three months or I had missed a couple of periods (providing I got a period in the first place) — I refuse to believe that not knowing would be some sort of warning sign for my abilities as a parent. Women are more than the sum of their reproductive organs. Many of us have a lot more going on in our minds and lives than the thought of having babies. If I hadn't realized I was pregnant simply because I was busy working hard on the cultivation of my career or coping with family drama or in a bad mental health state or otherwise stressed and preoccupied, that would've been OK, too. There are so many reasons one could potentially not spot a pregnancy, none of which come with the label of "Future Worst Mom."

It wasn't carelessness that led to my pregnancy. And it is not "absurd" that I didn't know. For lack of a better explanation, I just didn't know — plain and simple. It's just life. It's just a thing that happened. That so many doctors could turn me away, however — turn away my unborn child — that's the part of the story that still doesn't sit right with me. In fact, that's the only part of the story I would call absurd.