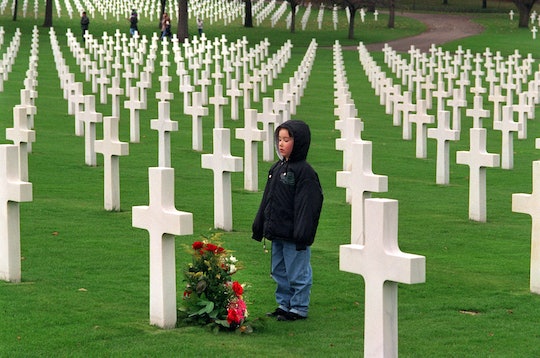 Believe It Or Not, Memorial Day Is Actually Not Very Far Away

Feeling the itch to officially kick off summer? Well, as every American knows, it's not really summertime until you've used Memorial Day as an excuse to consume mass quantities of barbecue ribs and popsicles. And take note, the federal holiday is swiftly approaching. Do you still have time to pick up some hot dog buns ? When is Memorial Day this year?

Memorial Day, a holiday established to honor and remember those who have died while serving in the military, is always the last Monday of the month of May. This year that means we'll be honoring fallen soldiers on Monday, May 25, 2020.

Originally called Decoration Day, the tradition began with individuals decorating grave sites of those who had died in war and was widely observed beginning on May 30, 1868 following the American Civil War, according to PBS. The event's inaugural date was highlighted by former Union Gen. and sitting Ohio Congressman James Garfield's speech at Arlington National Cemetery "after which 5,000 participants helped to decorate the graves of the more than 20,000 Union and Confederate soldiers who were buried there."

New York became the first state to make it a legal holiday in 1873. But it wasn't until 1971 that Memorial Day got federal recognition when Congress passed the Uniform Monday Holiday Act, making the last weekend in May a three-day holiday.

If you recall seeing past presidents placing a wreath at the Tomb of the Unknown Soldier at Arlington National Cemetery in Washington, D.C., that also takes place on Memorial Day when, in addition, a small American flag is placed on each grave.

Now, of course, most of us associate Memorial Day with backyard grills and Freeze Pops and retail sales and, best of all, a day off from work. This year, while you're kicking back with a cold glass of lemonade and ignoring your inbox, take a moment to remember the veterans whose service made this day possible.