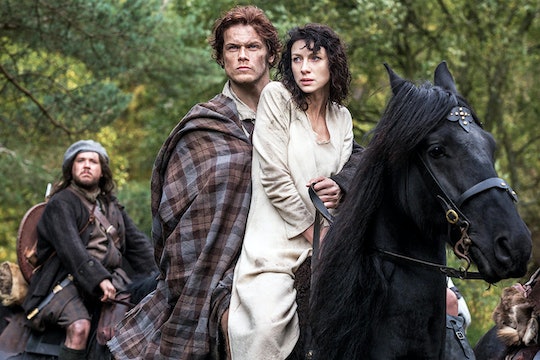 The first two seasons of Outlander brought to STARZ the kind of death, costumes, and sex that Game of Thrones became known for on HBO, and you can even consider it to be STARZ's response to the overwhelming success of the fantasy show, with Outlander even being based off a book series that the show has done well in following closely. But with all of this new Fall TV happening, when is Outlander Season 3?

When we left off with Season 2, Claire was going back to the future, which in this case is 1948, pregnant with Jamie's baby, but going back to her old life and husband, Frank. We get a flash forward of her life 20 years into her future and her daughter, Brianna (a good alternative to the Brian she'd promised Jamie if it was a boy) eventually puts it together that Frank wasn't Claire's baby daddy.

In the end, Claire finds out from Brianna no less that Jamie never died in the Battle of Culloden and realizes that she has to go back to him. I don't know how that's going to work, with her having aged a good 20 years, but we'll see. Outlander has a way of making things work out for its benefit.

That being said, it's probably important to ask, when does Outlander Season 3 start? Although there have been no confirmed date as of yet, there is the theory that Outlander Season 3 will premiere on April 1, 2017. And no, it isn't a cruel April Fool's joke in the making. It makes sense, though, since Season 2 of Outlander premiered around the same time this year, on April 8, and April 1 is the first Saturday of the month, making it a real possibility.

So far, the book series that Outlander is based on has acted as a sort of outline for the series, much like George R.R. Martin's A Song of Ice and Fire did for Game of Thrones. Season 3 of Outlander is said to be based off the third novel in the series, Voyager, making the show right on schedule with the books. While the official release date for Season 3 has yet to be confirmed, STARZ has released a synopsis for Season 3 of Outlander which is probably even better.

According to the synopsis recently posted on the show's page on the STARZ website, Season 3 will be picking up right where Season 2 left off, with Claire dealing with life in her present without Jamie and with the husband she left behind, while Jamie is in his own time, dealing with the loss of both Claire and the battle.

So while the Season 3 premiere date of Outlander might not be officially confirmed, there is a lot of information to tide us over in the meantime, as well as the idea that April 1, 2017 is likely going to see the resurgence of all of the time travel drama and mystery the show has become known for.