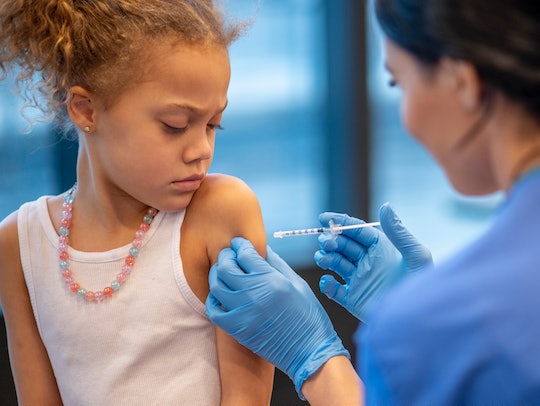 When Is Peak Flu Season? It Ain't Over Till It's Over

While the public's attention might be focused on concerns over the coronavirus outbreak, there's still the flu to contend with (and we're not out of the woods yet). Just look at any classroom attendance record for a reminder that even in these modern times, the influenza continues to rear its ugly, feverish, coughing, sore throat, runny nose, body aching, headache-y, vomit and diarrhea-inducing head. But when exactly is peak flu season?

"While seasonal influenza (flu) viruses are detected year-round in the United States, flu viruses are most common during the fall and winter," Scott Pauley, press officer for the Centers for Disease Control and Prevention (CDC), tells Romper. "The exact timing and duration of flu seasons can vary, but influenza activity often begins to increase in October," he explains. That's why you often see flu shot public service announcements going up in the early fall.

"Most of the time flu activity peaks between December and February, although activity can last as late as May," says Pauley.

“Each season is distinctive,” Schaffner added, explaining that 2018-2019 was particularly complicated because there were two dominant strains of flu circulating as opposed to the usual one.

So while it's too soon to tell how long this year's season will last, the need to remain vigilant against the nasty virus continues. So in addition to washing your hands, not touching people whenever possible, and getting plenty of rest, let this be a reminder: It’s never too late to get a flu vaccine. In fact, the CDC recommends “everyone 6 months of age and older should get an influenza (flu) vaccine every season with rare exception.” And the sooner the better, too, because it takes about two weeks for the antibodies to develop their forcefield to protect you from the flu.

The good news is, it’s not too hard to find the shot. Ask your pharmacist, doctor, or neighborhood minute clinic. Or, use this handy vaccine finder map to find everything from flu shots to Shingles vaccines: https://vaccinefinder.org/

And if you want to do your own research, Pauley suggests visiting the CDC website for a deeper dive into this year’s flu situation and how you can protect yourself. You can take a look at the seasonal data with Peak Month of Flu Activity from 1982-1983 through 2017-2018; review the latest developments within the fight against the flu; or get some more prevention tips.

Scott Pauley, press officer for the Centers for Disease Control and Prevention (CDC)