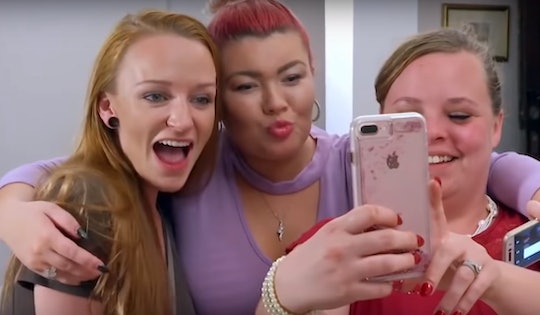 Teen Mom 2's next season might be right around the corner, but some fans look forward to every new season of Teen Mom OG just a smidge more. There is something to be said for the "original girls" and the latest newcomers to the first show in the franchise. And even though this season hasn't yet come to an end with its signature dramatic montage which plays out the finale, fans might be wondering when Season 9 of Teen Mom OG is.

A lot has happened already this season and because this is an ongoing reality TV drama, I don't expect any of it to be completely resolved by the end of the season finale Monday night. Unfortunately, MTV hasn't yet announced when Teen Mom OG Season 9 is. The good news, however, is that it will probably be here sooner rather than later. The way both Teen Mom shows air is a little different than other TV series. Seasons of both Teen Mom OG and Teen Mom 2 are broken up into two parts and when the first part of any given Teen Mom OG season ends, Teen Mom 2 picks up where it left off after its own previous season and vice versa.

In the past, Teen Mom OG premiered toward the end of the year, took a break to allow another installment of Teen Mom 2, and then picked back up to finish out the following year. This way, there are almost always new episodes on MTV of a show in the Teen Mom franchise. If Season 8 continues this pattern, then it will likely pick back up in 2020 after concluding the first half of Season 8 on Monday. This means Teen Mom OG Season 9 probably won't be here until late 2020, but Season 8 is likely far from over.

This season presented a handful of juicy storylines that all of the young moms brought to the show. Cheyenne navigated co-parenting with her ex Cory after coming to terms with the fact that they wouldn't be getting back together. Catelynn and Tyler struggled through marital troubles while taking care of their new baby. Elsewhere, Amber dealt with her own adjustments as a full-time mom trying to find the right combination of medication and therapy.

Then Maci and her husband, Taylor, worked together to figure out how to get on common ground about future children in their family. And Mackenzie, who was just brought into the fold, simultaneously worked on keeping hope alive for her mom's cancer recovery and for her marriage.

Season 8 has already been a doozy for all five moms and if this season is anything like the more recent seasons before it, there will be a lot of more episodes to continue their stories after a break and before Season 9 of Teen Mom OG.

One of the reasons the seasons are so much longer lately could be because the network wants to keep up with social media. It has gotten to the point where fans already know the big talking points of each season because they see it all play out on social media beforehand.

By keeping the series on TV almost constantly, the show does its best to keep up with what is going on in the real world in the moms' lives. It’s also hard to show enough of each story when there are five to get through each episode. Allowing for longer seasons, even if they are split in half, adds more time to each mom’s storyline every season.

MTV hasn't yet announced when Teen Mom OG Season 9 premieres, but there is going to be a lot more drama before Season 8 is officially over.