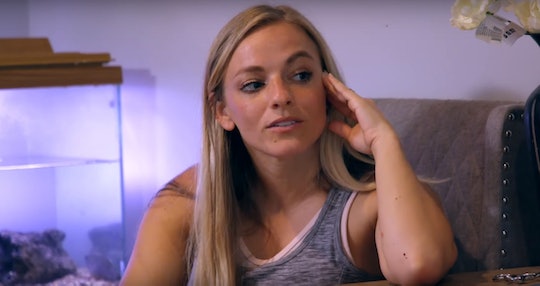 Teen Mom OG has had a lot of cast turnaround in the past few seasons. Up until Season 7, the majority of the cast had remained a firm part of the show and reaped the benefits of being the "original girls" who were plucked from 16 and Pregnant to continue their stories on a longer form reality show. Now, Mackenzie McKee has been introduced as a guest to share her story in Season 8, but fans might be wondering who Mackenzie McKee is on Teen Mom OG. Like most of the other moms on the show, she got her start in the 16 and Pregnant docuseries. But if it hadn't been for the way the Teen Mom OG cast shifted in recent seasons, she might not have been asked to be a part of the spin-off series that started it all.

First, Farrah Abraham left the series in Season 7 after being one of the original young moms who was cast from 16 and Pregnant. Then, Cheyenne Floyd and Bristol Palin were brought in to fill the void. But after Bristol left the show after just one season, Teen Mom OG was once again left with a fragmented cast. When Mackenzie made her Teen Mom OG debut last week, she said in a voice-over that she would be sharing her story with viewers for a few episodes, but after a quick recap of her time in the franchise before, fans may have realized where they recognized her from.

After 16 and Pregnant, Mackenzie was cast in the short-lived Teen Mom 3 and continued to share her marital woes as a young wife and mother. After the show was canceled, Mackenzie continued to share personal aspects of her life with her social media followers. And although she was only just brought on as a guest on Season 8 of Teen Mom OG, dedicated fans of the franchise have remained up to date on the goings on in her life.

Since Teen Mom 3, Mackenzie started a workout brand and shared the progress of her in-home gym with husband Josh McKee on social media. Her business, BodybyMac, is based on physical fitness and nutrition. On the official website, Mackenzie offers customers subscription plans for at-home workouts.

Mackenzie regularly posts photos from her dual workout sessions with Josh and despite her concerns about his potential infidelity on Teen Mom OG, they seem to have a good thing going for them. Mackenzie has also gotten closer to her mom since her mother’s stage 4 lung cancer diagnosis. So, between her family, her mom’s battle with cancer, and working on her own business, Mackenzie has been busy since MTV pulled the plug on Teen Mom 3.

The good news is that Mackenzie does have a chance at being promoted to series regular next season. With the vacancy in the cast left by Bristol, there is room for one more mom to take up permanent residence on Teen Mom OG. Being a former cast member from another show in the Teen Mom franchise works in her favor, especially if fans accept her as part of the main cast.

Briana DeJesus, who was also part of the Teen Mom 3 cast, was brought on in Season 8 of Teen Mom 2 and has since become an integral part of the show. Because Mackenzie also has a history with the franchise, she could have a similar fate on Teen Mom OG.

Right now, Mackenzie is supposed to be a temporary cast member, but back in July, People reported that Mackenzie was doing test scenes to potentially fill Bristol’s spot in the cast. If viewers respond well to her story in the last few episodes of the season, she could go from former Teem Mom 3 star to a permanent cast member on Teen Mom OG.