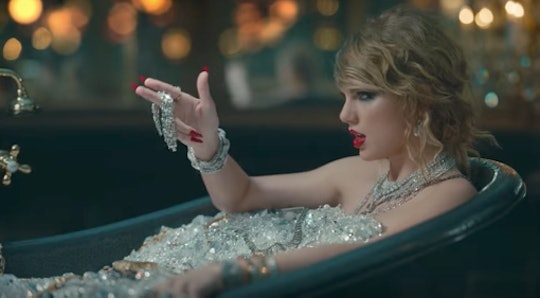 Here's How To Get Better Tickets To Taylor Swift's 'Reputation' Tour

Taylor Swift (the new one, not the old one because she "can't come to the phone right now," obviously) is ready. She's ready to move forward, she's ready to shed her skin and become this new version of the old version. But here's the thing; certain parts of old Taylor Swift are hanging on, especially her breathtaking business acumen. While fans are desperate to find out when Swift's Reputation tour might happen, she's focused on running the mega business that is Taylor Swift like a well-oiled machine while still remaining *mysterious*.

Ever since Swift dropped her first single from Reputation, a little-known ditty called "Look What You Made Me Do" that might be about some famous folk, fans have been losing their marbles. It probably didn't help matters that Swift toyed with everyone in the days leading up to the song's release; first she wiped her social media accounts clean, then released a series of short videos of a slithering snake (perhaps related to an earlier feud with Kim Kardashian West, some have said). The single went insanely viral, and fans were thirsty for more. So what does a smart musician/business woman do? Trademark everything remotely related to the new album and tell fans if they want tickets to a potential concert in the future, they're going to have to play along.

While Reputation is set to be fully released on Nov. 10, no official tour date has been set. Still, that didn't stop Swift from setting up Taylor Swift Tix, a site where "verified fans" can improve their chances of acquiring concert tickets by proving they're genuine "Swifties" (a term she has trademarked, so be careful) by getting in on some boost activities. Taylor Swift Tix reads:

Taylor Swift is committed to getting tickets into the hands of fans...NOT scalpers or bots. So she’s collaborating with Ticketmaster #VerifiedFan to create an exclusive program to help YOU get the best access to tickets in North America, in a really fun way.

Once you register, improve your place in line by participating in boost activities until initial registration closes on Nov 28.

So how does one boost their chances of getting a better spot in line? Spend the most money on Swift merchandise and you will earn the most points. It's as easy as pie. Of course, no word yet on when a tour might happen or how much the tickets might cost. But a true Swift fan would not concern themselves with these trivial details.

To be perfectly fair, Swift is in the music business. And she's good at it, too. She keeps control of her work in a way few other artists have managed to (as Vanity Fair reported, she has been locked in legal battles with streaming service Spotify before), while continuing to sell albums by the truckload.

Perhaps having a good head for business isn't part of the Taylor Swift accepted narrative, but it should be. Fearlessly taking care of business is absolutely something to admire, especially in a woman.

Even if it makes her tickets harder to come by.