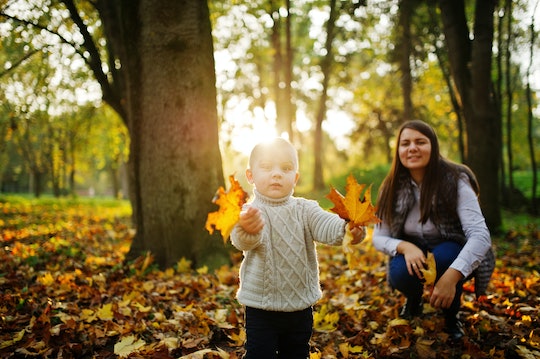 So When Is The 1st Day Of Fall Actually? Your Boots Are Waiting Patiently

I'll admit I must have been daydreaming in class the day my teacher discussed the differences between equinoxes and solstices, and how they tell us when the four seasons change. Who even remembers those dates? Certainly not this girl. So when is the first day of fall 2019, officially? Now that we're in mid-September, the seasonal switch comes sooner than you might realize.

It never fails: every time the close of one season approaches, I end up doing my Googles. Now that Labor Day has passed and summer vibes are all but gone, I'm acting like it's already fall, sending my kiddos to school with their hoodies "just in case." If you're like me and need a quick refresher, remember the equinoxes occur in spring and autumn, and the solstices happen in winter and summer, according to the National Weather Service. Although modern civilizations no longer rely on the equinoxes or solstices to tell us when to plant or harvest, as the History Channel reported, we still use them to tell us when the seasons shift.

An equinox is more than just a cool Latin name; it's all about the position of the sun, which is "situated just above the earth's equator," to give us nearly equal daylight and darkness, reported Country Living. The shorter days indicate we're barreling toward the autumnal equinox, which is on Monday, September 23. The Old Farmer's Almanac reported the precise start of fall as 3:50 A.M. EDT, if you're game to burn the midnight oil on the east coast in honor of autumn. Fun fact: as per Country Living, our various time zones mean the equinox occurs at a different hour depending on where you live, even though the solar event is simultaneous for everyone.

September just feels like a "fall" month even though most of it technically is summer. Retailers consider Labor Day the unofficial end of summer, stocking shelves full of autumn goodies as early as September 1, so chances are you've already indulged in a pumpkin spice latte, bagel, or cereal already. (I still wear white after Labor Day, though, because I'm such a rebel.) By now, most school districts have already kicked off the beginning of the fall opening to the 2019–2020 scholastic year, even the ones that started after the holiday weekend. The weather is also getting wonky, swinging from 90-degree highs and 55-degree lows in the same week in my neck of the woods of Washington, D.C.

Summer's on its last gasp, but I've honestly been in fall mode since August ended. Here's to counting down to September 23, the exact day you can tell people, "It's fall," if they ask you why you're wearing boots already. (And by you, I mean me, because I'd love to step into some Uggs ASAP). But feel free to get into all your favorite fall traditions starting now, because autumn is a vibe that doesn't have to wait for the equinox for you to enjoy it. I'm taking all my cozy sweaters out of their storage bins just for the occasion. Happy (early) fall, ya'll!