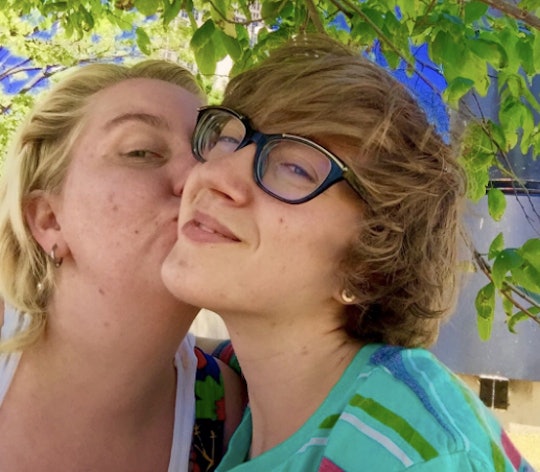 When People Treat My Wife Like A Dad, It Hurts Our Whole Family

As far as our 1-year-old son is concerned, having two moms is probably one of the least interesting things in the world to talk about. Things that qualify as more interesting include: whatever the bigger kids on the block are doing right at this moment, cat hair he just found on the rug, his favorite board books, and that one green block he's completely obsessed with for some reason. And yet, there are still people who insist upon talking about his parents, and their parenting roles, as if it’s somehow a big deal. Unlike my 1 year old, you see, a lot of people are used to interacting primarily with families with only one mom, and then instead of a second mom, another parent who is called a “dad.” And sometimes these people have such a hard time wrapping their heads around how a family like ours could exist that they try to treat my wife the same way they would treat a dad. But my spouse is not a dad. My wife is a non-binary queer person who very strongly identifies as a mother. And when people ignore her actual role in our family and instead apply their own assumptions to her, it hurts us all.

More Like This
Here's The Deal With Babies Who Sleep With Their Eyes Half Open
18 Best Sand Toys In 2021 For Babies, Toddlers, & Kids
You Will Not Regret This Perfect Baby Pool From Target
Tax Day Is Almost Here: Everything You Need To Know About The New Child Tax Credit

I know more often than not this it isn’t meant maliciously. I grew up in heteronormative America, and pretty much assumed that all families looked like mine did, so I get how easy it can be to fall into that pattern. And some of the people who treat my wife more like a dad than a mom are dads themselves and are responding to the things that they have in common with her. Maybe a male friend who has children will, for example, relate to my wife in that he also stood by his partner’s side during a long and difficult labor. But the similarities often end there, and assuming that the biological reality that she did not give birth makes her a father somehow is both insulting and wrongheaded in the extreme. Maybe it’s when people only ask me questions about what it’s like to be a new mom. Or maybe it’s the doctor who stared at her in confusion and said “so, if you’re not a mother and a father, what do I call you?” Or the friend who messaged me to say that he had heard of gay women who did identify as dads (it happens!) so how on earth was a straight man supposed to know what was right? Whether they’re stating their assumptions of her father-like status plainly or doing something more subtle like trying to pull her into the “dads group” at a gathering of parents, it’s still unfair and it’s still a problem.

The fact of the matter is that giving birth is not what makes one a mother, and not giving birth is not what makes one a father. Adoptive parents are very much parents, and adoptive mothers are very much mothers (regardless of their sexual orientation and relationship status). There are also, in fact, women who are parents who very much do not identify as mothers! Just like with any other kind of relationship, the only way to know how my wife fits into our family and relates to her son is to ask her and the other people involved. My wife identifies as a mother. That should be enough for everyone, really.

Despite my (oftentimes) more feminine presentation, and the fact that I’m the one who breastfeeds our kid, I do just as many “dad” things as my wife.

And anyways, unless you live in a very old-fashioned family, it’s hard to nail down exactly where different parenting roles begin and end. Some moms play sports, some days cook dinner, and since we aren’t stuck in a 1950s sitcom, all of that is actually OK.

My family needs — and deserves — to see the roles that we choose and the ways that we relate to one and other respected. My wife happens to be very much a mother, and when people assume that her role must be something else or fall under some other pre-constructed category because the role of “mother” is already filled, that can be extremely painful. For one thing, it makes all of the labor she is putting into our family, mothering labor, invisible. It tells her that the work that she does for and in our family is really only valuable insofar as it fits into heteronormative ideals about roles and relationships. And let me tell you a secret, our family’s work pretty much never fits into those roles.

If one of his moms is a mom at home, but treated more like a dad when we’re out and about, what message does that send him? And how is it supposed to make me feel?

We are a queer couple with a child, we are both moms, and between us, we complete a wide variety of parenting tasks. Despite my (oftentimes) more feminine presentation, and the fact that I’m the one who breastfeeds our kid, I do just as many “dad” things as my wife, trust me. I write our family budget, I mow our lawn (well, sometimes), and any and all heavy lifting and building of Ikea furniture is explicitly my job. I don’t think any of those things need to necessarily be gendered, but some people do.

But it’s more than just hurtful to my wife to not respect her chosen role in our family — it’s hurtful to all of us. As our child grows, he’s learning to find his own sense of himself, and his place in his family and wider community. Through that, he needs and deserves to see his family uplifted. If one of his moms is a mom at home, but treated more like a dad when we’re out and about, what message does that send him? And how is it supposed to make me feel?

All of this attempt to squeeze our family into a more heteronormative framework communicates clearly that those doing the squeezing don’t actually accept and respect us at all. Instead, they see me as needing an “opposite” in a more traditionally masculine co-parent. And it tells our child that families like ours are only accepted as they can be assimilated into mainstream culture. Essentially, the message is: you have choices, but don’t veer too far off the beaten path.

And we are raising him within a family and a wider community in which people of many different genders can do many different things, and as he grows we'll definitely point that out to him. And that is, perhaps, why this gets to me so much. I want my son to grow up knowing that he can choose to identify however the hell he wants and that doing so doesn't say a damn thing about his abilities as a person or, if he so chooses, a parent. But as long as he’s constantly getting the message that how his family chooses to identify doesn’t matter as much as how others attempt to fit us into their version of normal, he misses out and he grows up with the shadow of crappy gendered expectations looming over him. The only way we can give the next generation more freedom is by modeling that by giving it to ourselves. And so that's exactly what my wife and I are doing for our child.