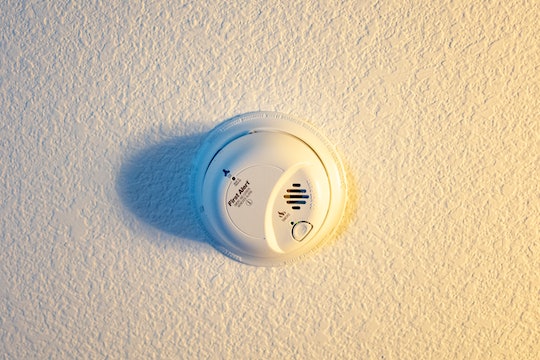 You probably know that familiar (albeit, annoying) chirping from a smoke detector that reminds you to change out the battery or do a quick test to determine if you need to get a new one. But, do you know when to replace carbon monoxide detectors or how often to check them? It's an important, but often forgotten, safety measure (especially in homes with children).

CO is a dangerous gas that often goes completely undetected (because it's odorless). If there's a CO leak in your home, and you don't have a detector, you risk poisoning yourself and your family which can have tragic consequences. Having a CO detector in your home is essential for anyone, but especially in homes with small children. Sharon Cooksey, a fire safety expert at Kidde, tells Romper via email, "Children in particular are at higher risk for CO poisoning because they breathe faster than adults, causing them to breathe in more CO." In fact, the Mayo Clinic lists children and unborn babies as two of the high risk groups for CO poisoning.

So, in order to keep your family safe, it's important to regularly test your CO detectors and replace them as needed. Cooksey recommends "testing your CO alarm at least once a week." As for replacing the system, she says, "CO alarms are designed to last between seven to 10 years, depending on your model. Newer models will even alert you when your alarm needs to be replaced." When it comes time to replace your detector, Cooksey says, "Homeowners should change the whole alarm, not just batteries."

There are a surprising number of ways CO can seep into your home. Cooksey says a good way to remember potential sources is by knowing "CO comes from anything not powered by electricity... such as furnaces, natural gas ranges, fireplaces, gas logs, and even generators when used during a power outage." Also, if you have a home with an attached garage, you should never run the car with the garage closed and try not to run it even with the garage door opened. Cooksey says, "An idling vehicle in an attached garage, even with the garage door opened, can produce concentrated amounts of CO that can enter your home."

To ensure you're adequately protecting your family, install carbon monoxide detectors throughout the home, particularly in rooms "where you and your family hang out, as well as near sleeping areas," according to Cooksey. Additionally, she recommends having your HVAC system, chimney, and air vents inspected "by a quality technician" every year to make sure there are no leaks. CO poisoning is a very real risk, but it can be easily mitigated by being proactive.