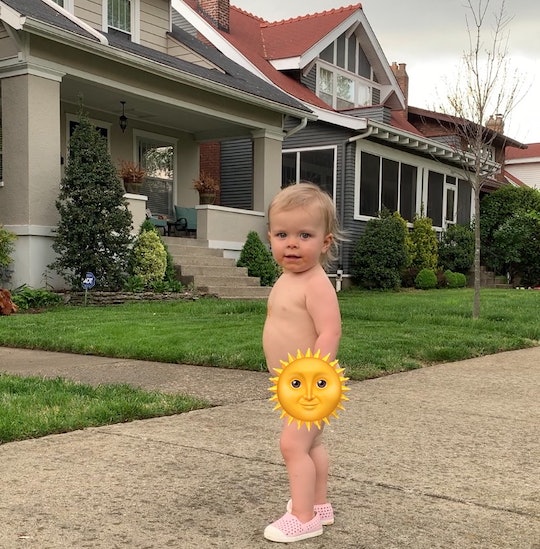 When The Mom Shamers Came For Me

On the most beautiful, long-awaited spring day, instead of changing my daughter's diaper, I removed it entirely and let her roam naked in the front yard before her evening bath. At now 19 months old, Melby loves nothing more (other than, say, refined carbohydrates or reading the same book 60 times in a row) than to be totally nude. She scuttled up and down that sidewalk with the most joyful abandon, her belly protruding happily, her tiny buns bouncing down the sidewalk, so comfortable in her skin, her environment, her whole world. I stopped to capture a snippet of it on my phone and, compelled by the infectiousness of her innocence and exuberance, shared it on Instagram. The next morning, I awoke to a startling private message from an unknown follower: my first overt experience with mom shame.

She began by saying, "Um, please put some clothes on your kid. The neighborhood street is not the place," and then she proceeded to call me a "piece of sh*t mom," who was going to "let some perv get [my] girl."

The bigger person in me knew I should ignore such garbage entirely; the aghast, defensive person in me wanted to respond equally cruelly.

I landed somewhere in the middle of those people and offered a single response that essentially stated, my child is fine; sexualizing nudity in a TODDLER is a much more real and damaging issue than whatever hypothetical risk I might be putting my child in; and most of all, I was horrified by her intentionally going out of her way to say something ugly to another person. Before I could block her, she called my child an ogre and made some threatening suggestion that she had personal information about me.

Then I most definitely threw in the towel, because this person was clearly not interested in any actual sort of discourse.

How is it the very women experiencing motherhood alongside me who most readily emerge to judge me?

Before I go any further, let me get something straight. I understand wholeheartedly, from a logical perspective, why someone might be worried about a child being nude in public. Having those facts, I still choose to let my daughter experience the freedom of being naked under my watch in a reasonable environment (i.e., not at the grocery store). I understand that people will have dramatically different opinions about that, along with innumerable other elements of parenting. What I do not understand is the immediate impulse to say something blatantly hateful to another person.

I wish I could say I brushed this off, recognizing how angry this person was, in ways that clearly had nothing to do with me, and how I simply had become an outlet for that emotion, but instead I less than casually fixated on it for the entire afternoon, mostly because, I realized, this kind of interaction and attitude is oftentimes the norm instead of the exception.

When I went to block this woman to avoid further interactions like this, I glanced at her page. Though her profile was private, visible on her bio line were two lone emojis. A dog and a baby face. Reading into that at the most simple level, I am to believe this person is herself a mother to both a human child and an animal. And this is what always leaves me most confounded: how is it the very women experiencing motherhood alongside me who most readily emerge to judge me? How did we get here?

In reality, I've experienced judgment like this on the regular from other people, most often other parents, though maybe just not as blatantly. I feel assured that I am not the only one experiencing such feelings of scrutiny and condemnation. A simple scan on one of the social media forums that are specifically for moms and one will see a host of questions that are punctuated by variations on the plea for "please no judgment."

I believe, sadly, that we feel so judged because we are.

Somewhere along the way, women, mothers especially, have fallen into the insurmountable trap of expectation: expectation that we are always hard working (either as an employee or a parent... or both) but not so overly dedicated to our work that we sacrifice family time or personality, that we are fit and beautiful and well-dressed but never in a way that makes us seem vain, that we are endlessly patient, creative, doting, and self-sacrificing but not exhausted, that we have all the answers without having to ask for help, that we should be strong and self-assured and capable but not appear “bitchy” by asserting ourselves too strongly or ruffling anyone, and that we DEFINITELY should/ shouldn't breastfeed/ formula feed, breastfeed in public/ cover ourselves, drink while breastfeeding/ pump and dump, cosleep/ bedshare/ put baby in her own room, nurse our babies to sleep/ let them cry it out, vaccinate/ not vaccinate/ delay vaccinations, stay home/ work, let baby watch tv/ entertain them constantly ourselves, hover too much/ let our child roam too far, be too strict/ be too lenient. There is simply the expectation that we do, be, carry, manage, sustain, enrich, placate, and consider everyone and everything around us and never have it offend or disrupt anyone.

THAT IS A LOT. I think women everywhere feel it. Every cartoon that depicts a scenario something like a mom at the grocery store with a crying child and some person curtly commenting about how she has her hands full or giving her a sideways glare, and then a dad in the exact same scenario receiving praise for being such a "good dad" illustrates how much pressure exists for moms to do an enormously emotional, demanding job with minimal effort or complaint but lots of criticism. We feel it hugely, but instead of challenging that paradigm, it seems like, oftentimes, women are internalizing that struggle and then projecting it onto other women around them.

What I am asking is that we, mothers, challenge that impulse and open up a dialogue, whether it be in real life, or simply internally, as an opportunity to consider someone else's perspective.

I felt it even in a moms' group I attended soon after my daughter's birth that purported to be super accepting. It was a pretty crunchy group of women, seemingly liberal in thought, who, as it turned out, judged other people for not being liberal enough. When mothers made comments that they sometimes let their babies cry, or gave them Tylenol, or wanted to let their babies face outward in carriers before it might be totally developmentally appropriate, they were met with abrasive responses that, essentially, those things were not OK. I didn't agree with everything every person said, but, again, it's the attitude I'm addressing and not the specific issues at hand. We will never agree on all the issues, but we can agree to treat each other with kindness and respect.

I will not pretend I don't have my own views on parenting, that I don't sometimes see another parent interacting with their child in a way that makes me cringe. I absolutely do. What I am asking is that we, mothers, challenge that impulse and open up a dialogue, whether it be in real life, or simply internally, as an opportunity to consider someone else's perspective.

If that woman on Instagram had taken a moment to offer some genuine concern with me, I probably still would have continued on my same trajectory, and honestly would have still felt mildly affronted simply because it's hard to hear anyone suggest you are somehow willfully endangering your child, but it wouldn't have resulted in the hideous name-calling, deeply hurtful exchange that left both of us isolated and shut down. It could have been a conversation.

Whether we're participating overtly with the emboldened freedom of someone protected by the anonymity of social media, or whether we're keeping it restrained to grumbles and muttered comments to friends, an attitude of criticism and divisiveness is not helping anyone.We have got to quit shaming other moms. It's only wounding all of us more in the process.

My challenge for myself, for other women too, is to find more ways we can connect, to celebrate our similarities, the ways in which we can support and encourage each other, to work to understand not only which we don't agree with, but especially that, to create dialogue about our differences, to not just recognize but relish our own imperfections so that we can do so for others, too. I am not perfect; I will not expect anyone else to be perfect. Motherhood is already way too lonely in so many ways without pushing away the people who might best understand and support us.

Brene Brown, research professor and specialist on shame, says it best, "Shame hates when we reach out and tell our story. It hates having words wrapped around it — it can't survive being shared. Shame loves secrecy. When we bury our story, the shame metastasizes."

While she's talking here about a person's individual feeling of shame, I believe her words extend to the point I'm also making: it is humanizing to be open and honest. It is hard to hate someone you know well or with whom you have something in common. So make a connection. Find more things to celebrate than condemn. We will always disagree on something, but what kind of life is it to spend our time focusing on that?

Let me finish by iterating: I don't have a nudist agenda. I am not trying to make a statement by letting my child roam diaperless. Part of why I love letting Melby be naked is simply for this reason: to watch someone fully, totally experience their body without, yes, judgment. She's not worried about folds or rolls. She's not worried about how she's being perceived. She is truly embodying living judgment-free, both for herself and others. She accepts the world as it comes, responds to it in appropriate measure, and recovers quickly from any offenses. How could I not want to encourage, celebrate, and share that?

I want it for everyone around me, too, especially, now, for other women, for mothers. I think it is possible. I am sticking with that, with my vision of my daughter as a beacon of what we all could be — unfettered, accepting, free.