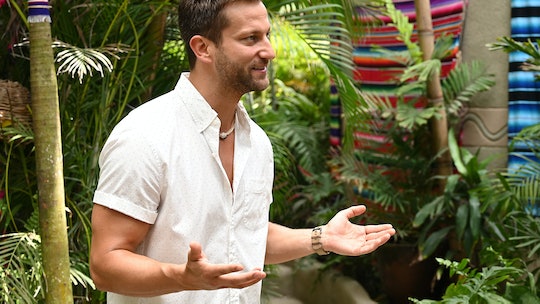 New members of Bachelor Nation might have been a little surprised when they heard Chris Bukowski would be returning to the ABC reality franchise for the sixth time. Of course, fans are used to seeing familiar faces pop up every now and then, especially on Bachelor in Paradise. But the Season 6 cast member currently holds the title for the most appearances in Bachelor history, including two stints in Mexico. So when was Chris Bukowski on Bachelor in Paradise? Here's a brief glimpse at the formerly retired star's past.

Chris made his Bachelor Nation debut during Season 8 of The Bachelorette with Emily Maynard. The contestant, who was 25 at the time, was eliminated after hometown dates. But that certainly wasn't the last time the fandom saw him. Back in 2012, Chris found himself on Season 3 of Bachelor Pad, a short-lived series within the franchise. He then crashed Andi Dorfman's season of The Bachelorette in 2014, where he was escorted off the set. Later that year, Chris was introduced as a cast member of Bachelor in Paradise Season 1. However, he quit early on in the season due to a knee injury. Chris eventually returned in Aug. 2015 for Season 2 of Paradise, but he left by Week 4.

Following Chris' second run on Bachelor in Paradise, the reality star announced his retirement from the franchise. Chris made his final goodbyes on the BiP after show. He said:

I am formally retiring from reality TV. I've been on five Bachelor-related TV shows and it's finally time to hang up the roses. I'll be honest, I became obsessed with being on TV. It led me stumbling down a long, dark jungle path to embarrassment. I became a joke, but I kept coming back because I truly believed I could find love and fix my reputation on one of these amazing journeys.

Four years have passed since his last time on Paradise, and Chris is now ready to come out of retirement and return to the Bachelor franchise, according to an interview with Us Weekly.

"I feel like I started this when I was so young," Chris shared with the publication. "I just turned 25. I’m 32 now, so I felt like it was a good time for me to come back and do this in the right way.”

The reality star also hinted at what fans can expect from him in the upcoming episodes of BiP Season 6.

"There are, like, different reputations for me, so many different things [out there], and I hope this time around people can see who I really am," Chris said. "Seeing me grow all these years, it’s been a whole decade, I hope that this time people see.”

Chris might have had a rocky start when he first showed up in Bachelor Nation, but his time away from the spotlight seems to have done the reality star some good. After the premiere of the show's sixth season, fans noticed a refreshingly mature side to Chris. Now, let's just hope he keeps it up and leaves Mexico with a new leading lady.