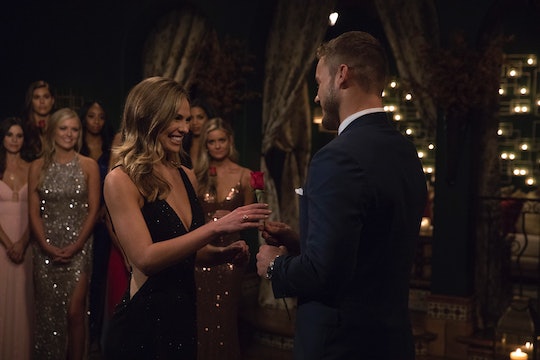 Hannah B. On 'The Bachelor' Has Been On The Pageant Circuit For Years

Since The Bachelor season premiere, Hannah B.’s past as a former pageant queen has been a big storyline for her. She was crowned in her home state of Alabama and went on to compete for Miss USA 2018, but didn't take home that second title. Other than being a University of Alabama alum, her pageant past is a big part of who she is, so when was Hannah B. Miss Alabama? The Bachelor contestant is no stranger to competition, which is probably a good thing since things can get pretty competitive on the show. Let’s just hope she brought her A-game since her former fellow Miss USA competitor Caelynn is also in the running to becoming Colton’s wife at the end of the season.

Hannah B. was crowned Miss Alabama USA in November 2017 and went on to compete in the pageant for Miss USA 2018. Caelynn, who was Miss North Carolina USA in 2017, was the first runner-up in the pageant, whereas Hannah B. didn’t make it as far as the top 15. This is likely where their friendship started to go downhill, but while Hannah B. was making the rounds as a pageant queen, she seemed to take it all very seriously.

Shortly after she earned the title of Miss Alabama USA, Hannah B. spoke to Alabama NewsCenter about her platform for mental health. She explained that because she struggled with depression and anxiety in the past, her goal was to "encourage people and to be like… hey, I’ve been there, but here I am today… I’ve been in a dark place, but there is light in the darkness."

Hannah B. had been in pageants since she was 15 years old before earning the title of Miss Alabama USA 2018. She originally took up the pageant circuit because of the potential for scholarships that it afforded her, but she eventually grew to love the skills it helped her hone, like dancing and public speaking.

Although Hannah B. didn't make it to the end of the Miss USA 2018 competition, there are still tons of pictures from her pageant days on her Instagram. She’s still close to her fellow Miss USA participants, even if her friendship with Caelynn doesn't seem to be on the mend anytime soon. In one Instagram post, Hannah B. referred to some of the women as "sweet souls" and her sisters.

It's unclear what the future holds for the 2018 Miss Alabama USA, but right now, she seems to be having fun making fun of herself on The Bachelor and paying homage to her university with a well-placed "Roll Tide" more often than not. On one Instagram post about her first date with Colton, she revealed that in her Bachelor diary she wrote, "Hello, I’ve been here two days?!! I’m freaking so uncomfortable about what the heck I’m doing and I’m supposed to make him googly-eyed over me." Relatable AF.

So far this season, Hannah B. has been one of the only contestants to have a one-on-one date with Colton and although it was a little awkward, it was the start of what might be an actual relationship for them. She definitely has promise as a potential frontrunner if she doesn't get cut. Or, if her apparently still ongoing feud with Caelynn doesn't get in the way of her relationship with Colton. He already seemed exhausted by the she said/she said in last week’s episode. Unfortunately, it might all be leading up to a two-on-one date where only one of the former pageant queens can be crowned and the other is sent packing. Until then, Roll Tide.