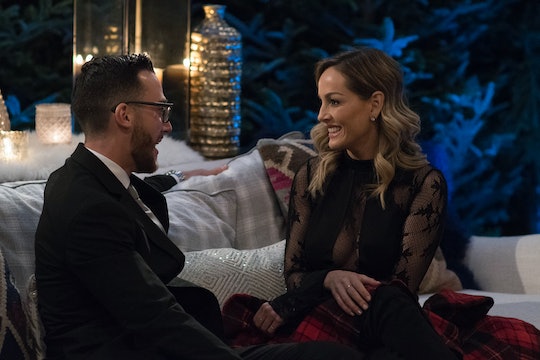 Say what you will about falling in love on reality TV, but in some cases, it seriously works for the contestants of Bachelor Nation, and that now includes The Bachelor Winter Games. The first ever season of the show ended with a few established relationships, but what surprised many viewers was the proposal involving Benoit Beauséjour-Savard and Clare Crawley on the World Tells All special afterward. So, when will Clare and Benoit from The Bachelor Winter Games get married? The couple was an unexpected match, especially since they broke things off so early in the season, but they now seem very happy together.

Just in case you need a reminder of the heartbreak that occurred before couples had even made it to their Fantasy Suite dates, Clare and Benoit were one of the first pairings of the season. They had a connection, it seemed, and even bonded while cooking and kissing in The Bachelor Winter Games mansion in Vermont. But when Clare realized she also had feelings for Christian Rauch and that they were stronger than her feelings for Benoit, she had to let him down gently, for her benefit as well as his. They said goodbye through what seemed like genuine tears and it was over.

So what happened between then and now? According to the pair on the World Tells All special, things didn’t end there for them. And while they have yet to announce a wedding date, their engagement was the best thing to come out of the inaugural season of the show.

In true Bachelor form, the special saved Clare’s segment for last and welcomed her on-stage to go through her entire journey in the franchise, from her time on Season 18 of The Bachelor and Bachelor in Paradise Season 2, to her experience on The Bachelor Winter Games, which filmed in November and December of 2017. But then Chris Harrison brought up the fact that Clare apparently found love on the most recent show and after the way things ended with both Christian and Benoit, it was a surprising thing for most fans to hear. So when Benoit made his way to the stage, minds were blown.

Apparently, they reconnected after filming ended and began a relationship outside of The Bachelor franchise, away from cameras. With Clare living in California and Benoit in Montréal, which is no less than a five hour flight away, it’s going to be interesting to see how they build their new life together.

In a way, it’s almost hard to believe that Benoit’s proposal on the World Tells All special was legitimate, since their breakup was so heartbreaking near the beginning of the season. But Benoit's feelings for Clare have seemed totally genuine right from the start. If his kisses with Clare meant that much to him, then he likely takes any marriage proposals even more seriously.

Plus, since the show finished filming in December and it was around that time or even before then that Benoit reached out to Clare, we have to remember that this means they’ve been dating out in the world for at least two months. This included meeting up in California to spend time together in person and also FaceTiming each other to stay connected, even while living in two entirely separate countries.

They may have had a rough start, but somehow, they’re probably one of the strongest couples to come out of The Bachelor Winter Games and are now the first engaged duo of the series ever. Benoit and Clare now have a lot to figure out long before they set a wedding date, but their love and engagement seem very real.