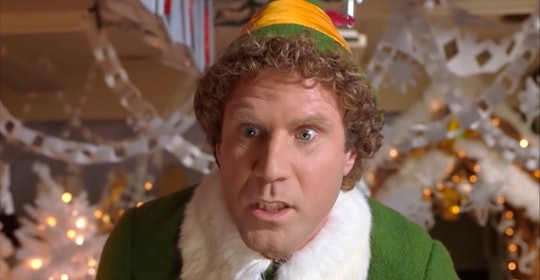 How To Watch 'Elf' On TV This Year, Because Son Of A Nutcracker, It's A Classic

Even though so many new Christmas movies come out every year, there are also a ton of classics that deserve at least one rewatch each December. For me, the one movie that warrants a rewatch is Elf. The Will Ferrell-led comedy never fails to make me laugh, raise my spirits, and provide an escape from the realities of winter in New York City. Since I'll be spending some time at a house with cable this holiday season (thanks, Mom and Dad!) I'd like to know: When will Elf be on TV this holiday season?

As it turns out, AMC scored the exclusive broadcast rights to air Elf this holiday season, according to Vulture. The rights used to belong to Freeform (and its 25 Days of Christmas), but this year, the movie will only air on AMC. In addition to Elf, AMC also won the rights to air the Christmas classics The Polar Express and National Lampoon’s Christmas Vacation, and the films will join AMC's "Best Christmas Ever" roster, as noted by Vulture.

Fortunately for those without access to AMC, Elf is also available for streaming on several platforms. You can rent Elf for $4 or buy it for $15 on a variety of platforms, including YouTube, Amazon Prime Video, Google Play (if you happen to prefer that) and also iTunes. The only cheaper price I could find was on FandangoNOW, where you can rent a non-HD version for $3 instead of $4.

In case you need a refresher, Elf stars Will Ferrell as Buddy, a six-foot-something tall man who was raised as an elf in the North Pole. When he finds out he's not actually an elf, but a grown human man who was adopted and raised by an elf, he decides to travel to the mystical land of New York City to meet his birth father. From there, Buddy gets into plenty of adventures — and along the way, he gets to know his new family, he makes friends, and he even falls in love.

And hey, parents of young kids — Elf is rated PG, and is equally enjoyable for people of all ages. So if your child hasn't seen Elf yet, 2018 just may be the year to introduce them to this family-friendly Christmas flick.

Even though AMC may have the monopoly on broadcasting a few key Christmas films this year, there are so many others you can watch on other channels. For example, Hallmark produced 22 new Christmas movies this year that will be airing between now and the end of next month, and Lifetime is doing the same with 14 new movies. And as mentioned above, Freeform is hosting its annual 25 Days Of Christmas special, with multiple Christmas movies airing every single day from Dec. 1 through Dec. 25.

As Buddy the Elf would say, "The best way to spread Christmas cheer is singing loud for all to hear." Merry Christmas, fellow Elf fans!

More Like This
The White Lotus Is The Perfect Thrilling Treat For After The Kids Go To Bed
These 30 Halloween Tattoos Keep The Holiday Going All Year Long
10 Of Bandit’s Funniest Dad Lines From 'Bluey'
A New 'Golden Girls' Themed Restaurant Is Happening!